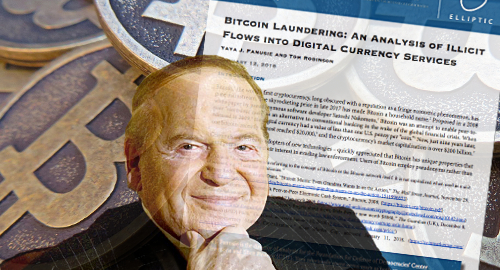 A new report claims online gambling sites are prime conduits for laundering ill-gotten Bitcoin cryptocurrency proceeds, but its authors either chose to ignore or remain ignorant of gambling’s role in Bitcoin’s rise.

Last week saw the release of a report titled Bitcoin Laundering: An Analysis of Illicit Flows into Digital Currency Services. The report was issued by the Center on Sanctions and Illicit Finance (CSIF), an offshoot of the Foundation for Defense of Democracies (FDD), a Washington-based neoconservative think-tank.

The CSIF enlisted the help of cryptocurrency analytics provider Elliptic to study “illicit inflows” of Bitcoin to “conversion services,” basically any mechanism that allows users to convert Bitcoin into fiat currency.

The study examined the movement of Bitcoin derived from “clearly identified illicit activity,” which the study primarily defines as any Bitcoin moving off ‘darknet’ marketplaces, including the now-defunct Silk Road, as well as Bitcoin derived via fraud activity, ransomware and Ponzi schemes.

Before we go any further, it’s worth quoting the report’s finding that “the total percentage of identified ‘dirty bitcoins’ going into conversion services was relatively small. Only 0.61 percent of the money entering conversion services during the four years analyzed were verifiably from illicit sources.”

The study, which covered Bitcoin transactions during the years 2013 to 2016, also noted that there’d been “an across the board decline in the proportion of illicit transactions” during 2016.

The authors speculated that this decline is likely due to Bitcoin’s increasing popularity as a speculative investment, plus better anti-money-laundering compliance by conversion services. For example, illicit entities accounted for 3.6% of gambling sites’ incoming transaction volume in 2015, but this fell to just 0.57% in 2016.

The study refers to mixers and gambling sites as processing “far and away the highest proportion of dirty bitcoins,” while justifying the significantly higher percentage of illicit transactions at cryptocurrency exchanges due to their handling “much higher volumes” of overall crypto transactions.

The study’s authors fail to take into account that the online gambling sector was largely responsible for Bitcoin’s early development. As early adopters, gambling sites handled a disproportionately large volume of Bitcoin transactions in the years covered in the CSIF study, and thus would be similarly overrepresented in illicit transaction volume.

Moreover, the study notes that “97% of all illicit volume” via gambling and mixers “is being laundered through just three mixing or gambling services.” These same three services “account for almost half of all Bitcoin laundering.” European conversion services were particularly prone to handling illicit transactions.

So, a few bad apples, whose illicit transaction volume is on the wane, are used to discredit an entire industry, without whose early faith in cryptocurrency technology the Bitcoin revolution may not have succeeded.

The study’s authors also appear intent on creating a pejorative impression of a symbiotic association between gambling and darknet sites. The latter’s association with hard drug sales and murder-for-hire schemes couldn’t be further removed from gambling, a legal and popular form of entertainment enjoyed across the globe. Any attempt to create such an association in readers’ minds suggests an alternative agenda.

It’s worth noting that the FDD’s major donor list includes Las Vegas Sands supremo Sheldon Adelson, whose antipathy towards online gambling is no secret. Adelson has funded plenty of online gambling misinformation in the past and vowed to spend whatever it takes to ensure its demise. Caveat lector, people.