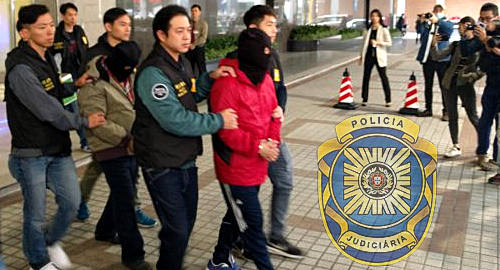 Macau police have arrested the prime suspect of this week’s brazen theft of $6.1m in gaming chips from the Wynn Macau casino.

The two men were arrested on Thursday evening at a park in Taipa and were delivered to the Prosecution Office the following day. Police said only HKD20k of the HKD47.9m worth of stolen chips has been recovered to date, and the suspects have so far kept mum about the whereabouts of the remaining chips.

PJ officials told local reporters that Lei walked out of Wynn Macau at 7am on Tuesday after finishing his shift at a VIP gambling club. Lei reportedly warned the only other colleague on duty at that hour to “stay quiet” before stuffing the chips into a bag, after which Lei casually strolled out the door and made good his escape on a motorcycle.

Lei, who began his Macau casino career in 2009 as a security guard before becoming a croupier in 2011, has reportedly admitted his guilt. Lei told police that he had ‘gambling issues’ and that he’d taken out loans to cover his gambling losses. Ho has denied any personal involvement in the theft.

Without naming Wynn Macau, Macau’s Gaming Inspection and Coordination Bureau (DICJ) has asked the affected casino operator to conduct a report into the theft. DICJ officials have also met with Macau’s five other casino concessionaires to ensure their staff surveillance procedures are up to snuff.

WHAT HAPPENS IN VEGAS…
On the other side of the Pacific Ocean, Las Vegas casinos have been hit with a rash of robberies in the past couple weeks. On January 10, a gun-wielding man demanded money from New York-New York’s casino cage. Three days later, Ellis Island was subjected to a similar gun-backed cash demand. On Monday, the SLS casino saw a man jump a counter, grab cash and flee.

The Associated Press said Vegas police don’t believe the incidents are connected but are nonetheless concerned with the crimes’ frequency. In November, a masked gunman robbed a cashier at the Bellagio’s poker room.