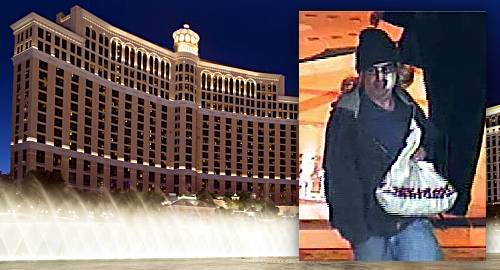 Nevada police are still searching for the armed bandit who brazenly robbed a cashier at the MGM Resorts’ Bellagio Casino in Las Vegas on Tuesday afternoon.

Word of the robbery initially came via Twitter, as noted actor/poker player/right wing crank James Woods informed his followers that he’d been “playing poker at the @BellagioPoker and a guy walks up with a gun and robs the cage thirty feet from us ten minutes ago.”

Woods hailed the “cool under pressure” Bellagio staff for having “surrendered the money quietly, so no customers would get hurt. Nobody even realized it was happening.”

Police later confirmed that a robbery had occurred and that the robber had fled the scene in a silver Chevrolet Cruze. Police subsequently announced that they’d recovered the vehicle, but the suspect remains at large, although Capt. John Pelletier confidently claimed that “those that commit crimes like this on the Strip will be hunted down.”

Police have yet to say how much money the robber managed to obtain from the cashier, but Pelletier maintained that “whatever amount of cash he got is not enough to face a lifetime in prison.”

The suspect reportedly entered the Bellagio wearing a wig, glasses and tape or bandages obscuring his facial features. The Las Vegas Sun reported that the suspect was accompanied by a second man who was evidently brought to the casino against his will and did not participate in the robbery.

Poker pro Ryan Laplante was inside the casino at the time and provided the following account to CalvinAyre.com’s Lee Davy:

Was a typical day at the bellagio.

Their series was going on for WPT, so while I rarely play there, because there was a $1100 tag team event running, I was playing that and playing cash.

While playing 1 of my levels in the tournament, a ton of metro ran behind my table (like 8 to 12), and towards the cage.

Following closely behind them were some medics with a stretcher.

Apparently, around 25 min before this, while I was playing cash at a table very close to the cage, with-in 10 feet, a man had walked up to the cage with a gun and quietly asked a cashier to give him all her money.

She did so without causing a scene, and he quietly walked out of the casino. No poker players noticed what happened, I’d guess that none of us knew until police started running in almost 30 min after the fact.

Huge amount of gratitude to the Bellagio and to the cashier for having such professionalism. Keeping cool and not causing a scene likely kept a bad situation from turning into a deadly one. ​

This isn’t the first such incident to plague the Bellagio. In July 2014, Scott Carmitchel pointed a gun at a Bellagio cashier and made off with over $43k in cash before being arrested a few days later at a different casino’s hotel, where he was busy entertaining four prostitutes.

Earlier this year, four men wearing animal masks robbed a high-end jewelry store at the Bellagio. One of the men later claimed that his family’s safety had been threatened by the other men if he didn’t participate in the heist.