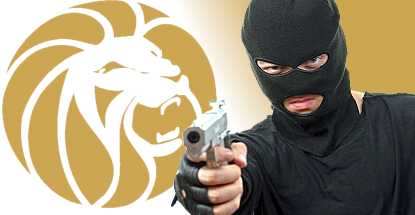 Suffice it to say, this has been a costly week for the Las Vegas properties of casino operator MGM Resorts. MGM’s Bellagio property was the site of an armed robbery on Friday night in which a man walked up to a Bellagio cashier window, produced a gun and demanded money. The Las Vegas Review-Journal reported police estimating the robber got away with $30k, while a casino employee said the total was closer to $50k. The casino apparently has surveillance footage of the robber, who escaped on foot, but police are keeping mum about any possible leads. [UPDATE] Police have identified 32-year-old Jesse Jones as a ‘person of interest.

This is the second major casino heist in the past week. On Monday, Caesars Atlantic City was relieved of $180k in cash after two masked gunmen made off with two cash boxes from an unspecified casino area of the property. The Bellagio was also the site of the botched heist of $1.5m in casino chips in December 2010, for which Anthony Carleo is serving three years in prison.

Friday’s heist followed Thursday’s approval by the Nevada Gaming Commission of a $100k fine of MGM’s Aria Resort and Casino for preventing state gaming agents from observing game play involving a high-roller. Aria is situated in the CityCenter development, which is jointly owned by MGM and the Dubai World investment group.

The incident, which occurred last October, took place at a roulette table in a public gaming area of Aria’s Salon Prive. A high-roller apparently developed a serious case of the bashful’s and objected to two undercover state gaming agents observing his wagering activities. An Aria floor supervisor leaped into action, attempting to shoo away the agents and, when they failed to amscray in a timely manner, ordered security guards to interpose themselves between the agents and the gambler so that his actions could not be observed.

This was the third time Aria staff had been accused of attempting to prevent people from observing high-roller play in a public area of the gaming floor. MGM didn’t contest the latest allegations and agreed to the amount of the fine earlier this month. MGM also assured the state Gaming Control Board that it had taken steps to prevent a reoccurrence of such incidents, although that’s pretty much what they said in 2012, the last time MGM had its knuckles rapped over this practice.