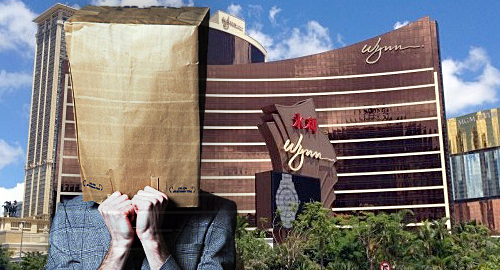 Wynn Macau’s $6m chip thief remains at large, but three people who spread his face on social media are under arrest.

On Tuesday, an unidentified Macau casino croupier reportedly walked out of a Wynn Macau VIP gaming room carrying a paper bag containing HKD47.9m ($6.1m) in stolen chips. On Thursday, Macau Business reported that the suspect was a 50-year-old male named Lei, who made off with 30 chips worth HKD1m apiece, plus an assortment of smaller-value chips.

Word of the internal theft first broke via social media posts that included a ‘wanted’ style poster with Lei’s name, photo and other personal data. The police denied releasing this information themselves, and on Thursday announced they’d arrested three individuals responsible for circulating the images.

Macau Business reported that these three individuals also worked at Wynn Macau, including a male administration clerk and two female croupiers. Macau’s Judiciary Police (PJ) said the identifying document in question “was sent exclusively to the security department in charge of overseeing casino incidents [and was] not for public access.”

The three casino staffers could face charges of breaching judicial confidentiality, which carries the possibility of up to two years in prison. Macau has strict data protection laws, as evidence by the organizer of a ‘name and shame’ online database of deadbeat gamblers, who was sentenced last summer to six months in prison for violating data privacy rules.

Meanwhile, a far less significant chip theft resulted in the arrests of three gamblers at Las Vegas Sands’ Marina Bay Sands integrated resort in Singapore. The three men had reportedly been working as a team to steal chips from fellow gamblers at MBS gaming tables since last weekend.

Police seized over S$23k (US$17.4k) in chips and cash found on the men at the time of their arrests. The suspects are due in court on Friday, where they could face up to three years on charges of conspiracy to commit theft.