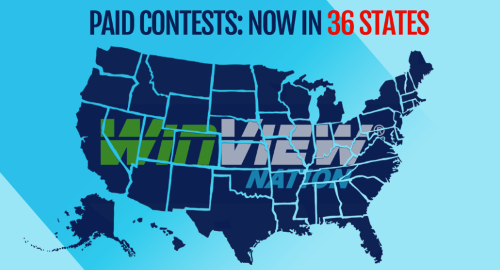 Sports prediction contest operator WinView Games is launching paid-entry versions of its contests across most of the United States.

Last May, WinView Inc. raised $12m in financing to fund the next generation of its free-to-play prediction service. WinView customers form pools in which they compete against each other to see who can more accurately predict a selection of in-play-style prop wagers on NFL, NBA and MLB games, as well as MMA bouts and other sports.

Winners of WinView contests were paid in virtual WinCoins, but these could be redeemed for real cash. WinView’s model was deemed legal because players didn’t pay a fee to enter contests.

At the time of that fundraising round, WinView confirmed it was developing a pay-to-play option. On January 4, WinView launched its first Paid Contests in five US states. Three days later, 31 more states were added to the mix, and the company says it will eventually be available in 41 states.

The states not making the cut are: Arkansas, Iowa, Louisiana, Michigan, Montana, South Carolina, Tennessee, Vermont and Washington. Players in those states will either have to content themselves with WinView’s free-play contests – which aren’t going anywhere – or get their legislators to amend local laws.

WinView claims its paid contests are “100% legal” in the states where they’re available due to the contests being (wait for it) “a game of skill.” That said, WinView is playing it safe by excluding college sports games from its paid-entry contests.

WinView aims to differentiate itself from daily fantasy sports (DFS) by emphasizing its “winnability,” aka the speed and frequency of its contests. For example, football and basketball contests pay out at the end of each quarter, something WinView claims DFS “can’t touch.”

At present, WinView’s paid contests charge entry fees of $2-$25, while prize pools range from $20-$300. Plans are afoot for winner-take-all and head-to-head contests, as well as contests that appeal to “high stakes players.”

The WinView app used to support itself via advertising revenue but the site will now be taking a rake of prize pools, and it’s a mite steeper than DFS players may be used to.

WinView’s app is currently available for both Android and iOS, but don’t look for the app on Google Play. WinView accepts payment via all major credit/debit cards, as well as PayPal.

It remains to be seen how WinView will fare should the US Supreme Court decide to overturn the federal sports betting prohibition that has allowed pseudo-betting like DFS and WinView’s prediction model to catch on with America’s underserved sports bettors.