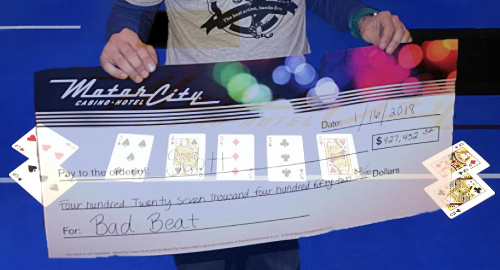 The poker room at Detroit’s MotorCity Casino has awarded the largest bad beat jackpot in US history.

On Tuesday, MotorCity’s official Twitter feed broke the news that six players had split a record $1.07m bad beat jackpot after a set of quad-queens beat an (almost) equally impressive set of quad-threes.

The player holding those quad-threes, identified only as Scott on his giant MotorCity novelty check, collected the lion’s share ($427,452) of the jackpot, while quad-queen Kenneth added $213,712 to his night’s winnings. The other four players lucky enough to be seated at the table each collected $106,856, and said a silent ‘thank you’ to the four empty seats beside them.

Phil Trofibio, MotorCity’s senior VP of casino operations, did his best Captain Obvious impression by telling MLive that “it’s not every day that a jackpot that big hits.”

The jackpot not only set a new MotorCity record – smashing the previous high-water mark of $569k set in May 2016 – it also set a new nationwide land-based bad beat benchmark for other casinos to clear.

Bad beat jackpots appear to be the new black, as it was only last August that the Playground Poker Club in Montreal set a new Canadian record when its bad beat jackpot paid out a total C$1.21m (US$971k), of which C$460k went to the player who snatched defeat from the jaws of near-victory.

Earlier this month, the US-facing online Chico Poker Network’s bad beat jackpot was hit for $994k, a new site record. Sadly, two of the six players at the table were sitting out when the jackpot was hit, and their share was divvied up among the other two active players.

A far less positive story emerged from the Red Rock Casino in Las Vegas shortly before Christmas. Last June, player Avi Shamir thought he’d scooped the property’s $120k bad beat jackpot, only for the casino to nullify the prize due to the player who beat Shamir’s hand, Leonard Schreter, having turned over his cards before the hand was through.

The casino’s decision angered the two players directly involved, along with the other 80-odd players who stood to collect some small piece of the jackpot. A complaint was filed with the Nevada Gaming Control Board, and a hearing into the matter was conducted in December.

However, the Las Vegas Review-Journal reported last week that Schreter had withdrawn his complaint for as yet unknown reasons. Because of this, and lingering questions over the casino’s bad beat policy, the regulators deferred making a ruling on the case until they had more info.