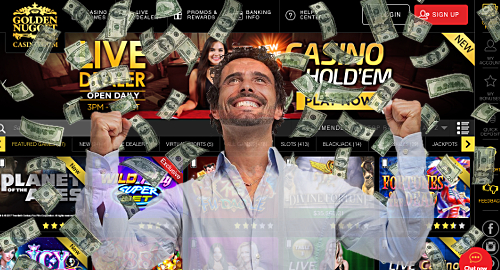 Figures released Friday by the New Jersey Division of Gaming Enforcement (DGE) show state-licensed online gambling sites generated revenue of $20.75m in December, the tenth straight month in which the market has exceeded the $20m threshold.

As usual, the Golden Nugget’s casino-only sites topped December’s revenue chart with just under $6.1m. The Nugget occupied the top spot throughout 2017 but the casino isn’t resting on its laurels, having just announced another (for the moment) unique selling point to attract the state’s online gamblers.

The Nugget was the first NJ-licensed site to feature live casino dealers and the company announced this week that it was expanding its live casino options – previously limited to blackjack, baccarat and roulette — to include Casino Hold’em, a poker variant in which players play against the dealer rather than each other.

NJ POLS URGE DOJ INACTION
The importance of online gambling to Atlantic City’s casino market was underscored Thursday by the release of a letter to the US Department of Justice from New Jersey’s federal representatives, asking the DOJ to ignore calls to roll back the 2011 legal opinion that paved the way for intrastate online gambling.

The New Jersey reps were prompted to act after other federal pols sent their own letter last November urging the DOJ to cram the intrastate online gambling demon back down the putrid hellhole from whence it sprang. Attorney General Jeff Sessions has suggested he favors an online gambling ban but has so far failed to act.