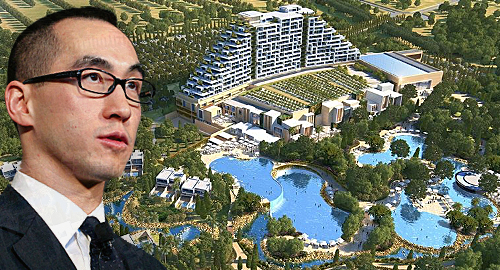 On Tuesday, the joint venture of Ho’s Melco International Development Ltd and local real estate group Cyprus Phassouri Zakaki Ltd, a member of the CNS Group, made its final presentation to a group of Cypriot notables, including President Nicos Anastasiades.

The partners didn’t specify exactly when construction of the €550m integrated resort would commence, but the project – touted as the largest venue of its kind to be built in Europe – expects to open its first phase by 2021 in Zakaki, just west of Limassol on the island’s southern coast.

A PricewaterhouseCoopers study projected that by 2022, the resort would generate economic activity of over €700m per year, or roughly 4% of the Republic’s GDP. Apart from the 2,500 permanent staff the resort expects to employ, the new attraction hopes to lure an additional 300k visitors per year to Cyprus.

Ho (pictured) assured Cypriots that he didn’t intend to mess up this project, which will be Melco’s first gaming venue outside Asia. Ho’s Melco Resorts & Entertainment already operates two highly successful City of Dreams-branded venues in Macau and Manila.

Ho said the Cypriot venue would emulate those other two properties in scale but he promised that Cyprus would also be getting something unique. “We really do live and die by our efforts to be different.”

City of Dreams Mediterranean will reportedly seek to offer guests something resembling the old town area of Nicosia, the Republic’s largest city, with an emphasis on greenery and large trees, to give guests the impression of being in a village overlooking the hillside.

Besides trees, the resort will boast a 500-room five-star hotel, along with the usual mix of eating, drinking, retail and entertainment options, plus 9.600-square-meters of MICE (meetings, incentives, conferences, exhibitions) space. Oh, and don’t forget the gaming floor featuring 136 tables and 1,200 slots.

The 30-year exclusive casino concession allows the joint venture partners to open a temporary casino in Limassol as well as four smaller slots-only venues while the main resort is under construction. These secondary venues are expected to open by June 2018.

The joint venture that won the race for the lone Cypriot casino license originally included US casino operator Hard Rock International, but Melco bought out its US partner last June and further increased its stake in the project to 75% last month.