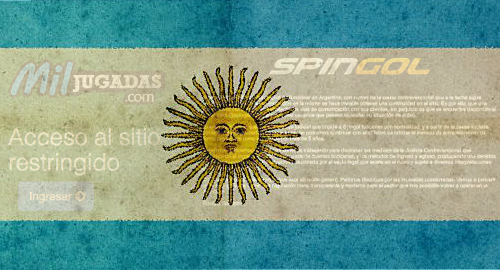 An Argentine court has ordered the operators of a controversial online gambling site not to leave the country, using new laws that classify unauthorized online gambling as a federal crime.

Last July, the Public Prosecutor’s Office in Buenos Aires suspended the domain of Miljugadas.com, an online betting site based in the province of Misiones. Prosecutor Martin Lapadú also froze bank accounts associated with the site, which he claimed had no authority to take wagers from punters outside its home province.

However, Miljugadas took the action in stride, switching to a mirror domain and continuing to take action from Buenos Aires bettors. Lapadú said at the time that he had yet to identify the site’s principal directors or representatives, but that dilemma has since been rectified.

The four individuals have been ordered not to leave the country pending resolution of charges under Article 301 of the Criminal Code, which was amended in December 2016 to make unauthorized online gambling a federal crime punishable by up to six years in prison.

The accused have been told they must provide their home addresses to the authorities and must check in with the police once a month. The four have also been ordered not to have any communication with each other until their legal woes are resolved. Lapadú said he expects the trial of the accused will get underway later this year.

Spingol’s site now features a splash page informing users that it “will cease to operate in Argentina,” due to “the case initiated by the prosecutor’s office in the city of Buenos Aires.”

Argentina’s national government has previously suggested it was working on a federal regulatory framework for online gambling but has yet to put forth any concrete proposals. Meanwhile, provincial lottery operations such as the Provincial Institute of Lottery and Casinos of the State Society in Misiones have launched their own sites, which have run into similar interference from Lapadú for allegedly catering to Buenos Aires punters.