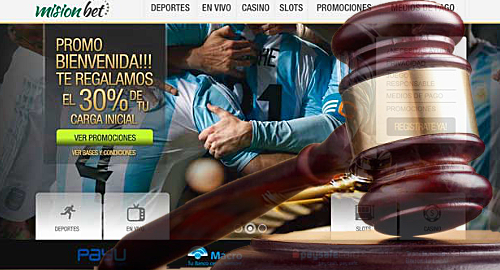 An Argentine court has okayed the relaunch of an online gambling site shut down earlier this year by prosecutors in Buenos Aires.

On Monday, Judge Rodolfo Ariza Clerici in the Court of First Instance in Buenos Aires ordered the national director of the Internet Domain Registry to lift the block placed earlier this year on Misionbet.com.ar, the online gambling site of the Provincial Institute of Lottery and Casinos of the State Society (IPLyC) in the province of Misiones.

The IPLyC launched its Misionbet gambling site in 2015, offering sports betting, casino and poker products to the province’s 1.1m residents. However, the site was forced offline this May by the chief financial prosecutor of Buenos Aires, Martin Lapadú, who claimed the site was illegally taking bets from punters located outside the province’s borders, including many in the national capital Buenos Aires.

Lapadú was reportedly acting on a complaint filed by the country’s Loteria Nacional (LNSE), which holds exclusive national rights for sports betting. In July, Lapadú took a similar action against Miljugadas1.com, another site based in Misiones, although it operated without the IPLyC’s blessing.

Annoyed IPLyC execs wondered why Lapadú was so quick to respond to LNSE’s complaints about domestic competition while ignoring the IPLyC’s longstanding complaints about internationally licensed online gambling sites catering to Argentine gamblers.

On Monday, Mionesonline.net reported that technical experts had convinced both Judge Clerici and Lapadú that geo-blocking tools were now in place to ensure Buenos Aires punters could no longer access the Misionbet site. However, Lapadú requested a 30-day trial of the system to ensure there were no cracks in its defensive walls.

Misionbet was the first online site launched by a provincial lottery monopoly, and reflected provincial impatience with federal politicians, who have made noises about imposing some kind of national online regulatory scheme but so far have failed to put forward any concrete proposals.

Despite the shutdown of its online operations, the IPLyC announced this week that it had generated a profit of ARS 121.4m (US $7m) in the first nine months of 2017, which already exceeds the total sum generated in all of 2016 by nearly one-third.