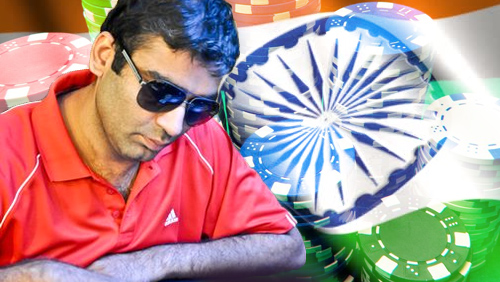 Lee Davy sits down with the Founder and CEO of India’s Poker Sport’s League, Pranav Bagai, to learn more about India’s poker ecosystem, and what role the PSL has to play in the event.

The Chris Moneymaker poker boom is becoming a line of old poetry etched into a piece of paper that looks like someone has spilt Worcestershire Sauce onto it.

We chase after them with all the success of trying to bottle the motes we see dancing in the shards of light that sneak annoyingly into your bedroom 30-minutes too early.

We seek them in China.

We seek them in Brazil.

We expect another one in the U.S.

But what about India?

2017 has been an incredible year for poker in the second most populous land mass in the world. It began in May. Amit Burman, Anuj Gupta, and Pranav Bagai founded India’s Poker Sports League (PSL). It was the first poker league held in India and the second to grab the attention of the global poker media after the success of the Global Poker League’s (GPL) first season.

Next came the World Series of Poker (WSOP). For 48-years, the most prestigious poker festival in the world had lacked bracelet winners from India like a Succubus annual disco lacks men. India put that right, not with one bracelet, but with three after Nipun Java and Aditya Sushant won the baby tag team event, and Java followed up with his second sliver of gold in the WSOP.com Online Championship.

So where would that lead?

Java took down a 3,173 entrant event at the Seminole Hard Rock in Florida. The nation took to the streets heralding him as the new messiah (I might have made that bit up), and more leagues rose up from the gleaming skull-white light of success that followed the words ‘India’ and ‘Poker.’

The entrepreneur Raj Kundra teamed up with the International Federation of Match Poker (IFMP) to create the Match Indian Poker League (IPL). The coupling removed the luck element of the game by changing the rules, and the first season is in the books, and by all accounts, it was a success.

The GPL changed its mantra to Compete Globally, Play Locally and went about its business creating a GPL India. The first professional to affiliate with GPL India was Muskan Sethi, and India’s President Ram Nath Kovind honoured her amongst 100 women from India who had managed to ‘make it’ in the country’s patriarchal construct.

“Hang on, we want a piece of that”, said the World Poker Tour (WPT).

A few weeks ago, Vikash Mantri defeated 527 players to become the first person to win a WPT title on Indian soil. Well, it wasn’t technically played out on land. The Main Event, held under the WPTDeepStacks wing, took place on the Deltin Royale Casino, a floating casino operating in the waters lapping the beautiful coast of Goa.

And that’s where this article lands.

I have come full circle, back to Goa, back to India’s PSL, and back to the CEO Pranav Bagai, who I tracked down like a dragon searching for gold in my quest to find out why poker in India is thriving and what the PSL intends to do about it.

Why is the PSL doing what it does?

“We want to establish poker as a game of skill and to change the negative perception built around this beautiful mind sport,” said Bagai. “We want to be at the apex of poker in India at all times. To create a league which is transparent in all dealings and is over -the-ground at all times. To create a phenomenal experience for everyone that touches PSL – in any form or manner.”

Why is now the time to do this?

“We are just scratching the tip of the iceberg of poker in India,” said Bagai. “Earlier, the popular card game in India was Teen Patti. Poker started becoming popular around ten years ago. Online poker started in India around five years ago. Now is the right time because people have started talking about poker and wondering what the game is about?”


What problem are you solving in poker?

“We are solving the “Perception Problem,” said Bagai. “The league has been designed to prove that poker is a game of skill. For instance, players who want to qualify for the league need to play six live qualifiers and 24 online qualifiers. We are trying to reduce the variance by ensuring that players need to perform well over multiple qualifiers to prove that they are good enough to be selected for the PSL draft.”

“The League is for anyone interested in poker. So that the masters of the game, shunned because of the gambling perception –  are given due recognition and glory.”


Why will they care?

“They will care because we care about them. Karma.”

What will they say to their friends when they compete in the league?

Can you watch it?


How can you add even more value?


What happens because the league exists?

“We are giving people a chance to prove that they are skilled players and that they don’t need to be hardcore professionals to represent a state/city at the national level,” said Bagai. “Amateur players get access to learn poker from the best players in the country. The best players in the country get to learn from the best in the world through the wild card process. Ideally, we transcend the social stigma attached to poker in India so that all the states in India recognise poker to be a game of skill.”


What has the league learned from Season 1?

“Poker has immense potential as a team sport,” said Bagai. “We are heading in the right direction, but we will need to innovate every year, based on learnings from the previous season. There is no set formula. We have to remain dynamic and open to change. Our greatest battle will be to change the perception of poker. The quality of production has to improve vastly. We need activities that engage the audience during the finals.”


The Match IPL and the GPL India, what do you think of the competition?

“Anything that is good for poker in India is great for Poker Sports League,” said Bagai. “We are glad that other companies are trying to launch leagues in India. It will help with growing the poker eco-system. That being said – the reach, scope and vision of PSL cannot be compared in the poker industry – we are a league apart, and that pun is intended.”

“Legalising poker across India. PSL will strive to become and remain the #1 poker league in the world.”

Bagai’s enthusiasm for poker gave me goosebumps. His words tickled me like the brief touch of a cat’s whiskers. While there may be 1.3 billion people living in India, poker’s gatekeepers, in the region, still imprison the game’s growth by the huge rusty collar of regulation.

The ambiguity of the laws around the game makes it difficult for bona fide operators to build something, whereas those that just want to make a quick buck move in for the kill.

Raj Kundra’s decision to team up with the MIFP is a strategic move to prove to the Lords and Masters of legislation that his league is one of skill. Bagai has the same problem and is trying to change hearts and minds by making the route to the PSL more challenging. GPL India relies on the brilliance of its competitors to prove a point.

Nothing more than eroded fossils, in the hands of short-sighted governments, that know nothing about the game, and unless the PSL, Match IPL and GPL India form a phalanx strong enough to force the gatekeepers to see poker through a different lens, they will all end up on the funeral pyre.