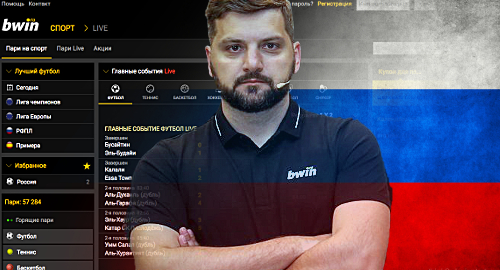 The launch was somewhat overdue, coming over five months after the joint venture plans were first announced, and the company originally targeted a September launch, which was later pushed back to October, and eventually to November. Regardless, Bwin.ru becomes the 15th officially approved online bookmaker to launch in Russia’s regulated market.

Digital Betting CEO Dmitry Sergeyev (pictured), who also serves as Bwin.ru’s CEO, has set a goal of capturing 10% of Russia’s online betting market within three years. The deep-pocketed Mamut has promised to spend up to €10m per year boosting awareness of Bwin’s Russian site.

As with all Russian online bookmakers, Bwin.ru customers will have to register both via the site and with a TSUPIS online payments hub. Digital Betting belongs to the First Self-Regulatory Organization of Russian Bookmakers, and all First SRO members funnel their payments through the First TSUPIS hub.

The registration process involves both online registration and physically presenting one’s identity documents at a retail venue. Digital Betting lacks a retail bookmaking presence, so Bwin.ru punters will have to traipse down to their local Mobilnaya karta money transfer outlet to complete their transaction.

And just because Bwin.ru got the green light from Russian regulators doesn’t mean other Bwin domains are welcome in Russia’s ring-fenced betting-only (no casino, no poker) market. In June, the Roskomnadzor telecom watchdog had blacklisted 118 Bwin-related domains. As of Tuesday, that number had risen to 126.

Russia’s parliament is currently mulling legislation that would clamp down on financial institutions processing payments for unauthorized online gambling operators. Last week, Sergeyev told Bookmaker-Ratings that the legislation was “a good bill” but he wondered if unauthorized operators “will find options for circumventing” its restrictions.

Sergeyev said much will depend on how the Federal Tax Service monitors and updates its funding blacklist. Russia blacklists over 1,500 gambling domains every week, a system that even Russia’s Communications Minister says is “not viable,” and Sergeyev has concerns that bookies will similarly shift their funding through different companies to evade the financial censors.