How important is two-time NFL MVP Aaron Rodgers to the Green Bay Packers? Including the game where he suffered a likely season-ending broken collarbone, the Packers have lost three in a row and not scored more than 17 points in any of them behind backup quarterback Brett Hundley.

On Sunday in Week 10, Green Bay visits Chicago in the NFL’s oldest rivalry. The Bears are 5.5-point favorites, the first time they have been favored in this series since December 2008 when Rodgers was in his first year as a starter.

The Bears were 7.5-point underdogs when they visited Lambeau Field on a Thursday in Week 4. Green Bay rolled to a 35-14 victory. Rodgers threw four touchdown passes. That was also the final game Chicago started ineffective Mike Glennon at quarterback. It has since been rookie No. 2 ove 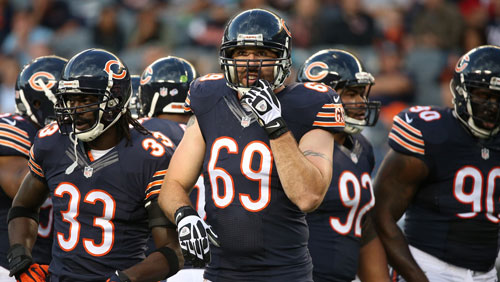 Arguably the two most “public” NFL teams these days are the Dallas Cowboys and New England Patriots, and both are taking heavy early action in their matchups.

Dallas is a 3-point dog in Atlanta; will the Cowboys have star running back Ezekiel Elliott? A court could reinstate his six-game suspension later this week and that line could grow if so. The Patriots come out of their bye week as 7.5-point favorites for the Sunday night game in Denver with the Broncos on a four-game losing streak and sticking with Brock Osweiler as their quarterback.

Among the biggest opening favorites on the board are the surprising Los Angeles Rams at -11.5 vs. Houston, and the public is hammering the Rams, the NFL’s highest-scoring team. That line would have looked much different had the Texans not lost superstar quarterback and Offensive Rookie of the Year favorite Deshaun Watson to a season-ending injury in practice last week.

Pittsburgh is another double-digit favorite in Week 10 at -10 in Indianapolis. The Steelers, who come out of their bye week on a three-game winning streak, have blown out the Colts each of the past three years, and Ben Roethlisberger has totaled 13 touchdown passes and no interceptions in that span with a rating approaching 140.

Pittsburgh is taking a heavy early lean that could push the number higher as it opened at 9.5 at sportsbooks.