Some casino stocks traded in the green on Wednesday after Macau’s Gaming Inspection and Coordination Bureau (DICJ) announced that Macau chalked up MOP26.63 billion (US$3.31 billion) worth of GGR, the highest monthly GGR tally since October 2014. 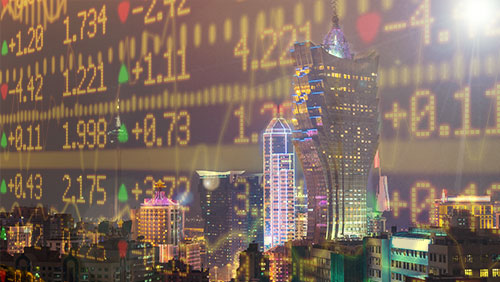 Analysts had earlier estimated Macau’s October GGR growth to be between 19 percent and 21 percent.

“Our latest consultant checks point to a noticeable pickup in demand following the 19th Party Congress in China, with VIP and mass revenue up about 30 percent and 9 percent year-over-year, respectively,” Nomura analyst Harry Curtis said in a research note Tuesday.

Nomura noted that the October GGR pick-up has something to do with the better-than-expected post-Golden Week demand. China’s National Day began on Oct. 1, but the week-long celebration that follows is known as Golden Week.

Data from the DICJ showed that Macau’s latest revenue figures brought the former Portuguese enclave’s GGR for the past ten months to nearly MOP220 billion ($27.37 billion), up 19.2 percent from the prior-year period.

“While volumes were strong, VIP hold rate and hold in premium mass was elevated during the month based on channel checks,” Sanford C. Bernstein Ltd. analysts Vitaly Umansky, Zhen Gong and Cathy Huang pointed out.

They noted that Macau had a tough year-on-year comparison to beat since it was during the fall of 2016 when Asia’s premier gaming hub saw a bounce in GGR and the opening of Cotai gaming resorts Wynn Palace and The Parisian Macao.