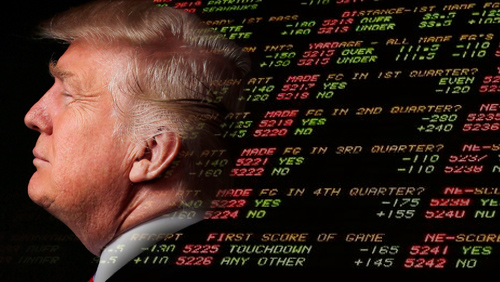 Members of the American Gaming Association (AGA) and US President Donald Trump aren’t seeing eye to eye when it comes to the issue of legal sports betting.

The Atlanta Journal-Constitution reported that the Trump administration is standing behind the nation’s pro sports leagues, which back the constitutionality of the 1992 Professional and Amateur Sports Protection Act (PASPA) that effectively bans sports betting in every state except Nevada.

For months, the former casino magnate-turned-politician has kept everyone guessing on his position in the case filed by New Jersey before the U.S. Supreme Court.

It came as a surprise for many that Trump turned his back on his pals in AGA on the issue since he had expressed his support on the legalization of sports betting in the US in the past – like this video interview in 1993:

In a brief filed before the Supreme Court on Monday, U.S. Solicitor General Noel Francisco’s arguments delved much into the Supremacy Clause of the Constitution.

Francisco argued that New Jersey erred in considering PASPA’s preemption of its sports betting law, which shouldn’t be seen as impermissible commandeering and that to allow the state to avoid preemption may set a precedent on flouting the Supremacy Clause.

The US government’s position runs counter to what Americans want. In September, the Washington Post published the results of a new survey in conjunction with the University of Massachusetts Lowell that showed 55% of US adults were in favor of legal sports betting versus just 33% who stated their opposition.

New Jersey has been fighting tooth and nail for the legalization of sports betting in the cash-strapped Garden State. For Gov. Chris Christie, sports betting is the best option to revive the floundering New Jersey’s casino and race track industries.

They hoped to get a piece of the approximately $150 billion that is wagered illegally on sports each year.