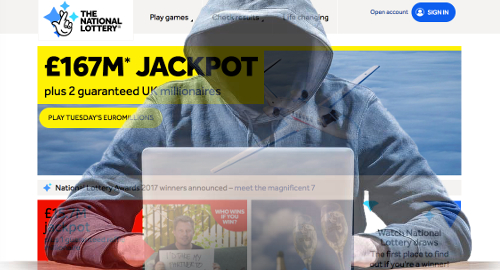 UK National Lottery operator Camelot has apologized to players after the Lottery website was knocked offline Saturday by a distributed denial of service (DDoS) attack.

The National Lottery website went dark for over 90 minutes on Saturday night, preventing punters from purchasing tickets for that night’s drawing by either desktop or mobile apps. The Lottery’s official Twitter feed offered “sincere apologies” while directing players to the 46k retailers who were “unaffected” by the snafu.

The following day, the Lottery confirmed that the outage was due to a DDoS attack, which was “experienced by many companies.” In mid-September, thousands of sites around the globe reported receiving ransom demands from a group of DDoS extortionists calling themselves the Phantom Squad. It’s unknown at present whether the Lottery was among those targeted by this group. Ireland’s National Lottery site was targeted in similar fashion last year.

No one ended up claiming that night’s £14.4m main lottery prize, marking the sixth week in which the big prize had rolled over to the following week. Players are increasingly dissatisfied with Camelot’s controversial decision two years ago to add 10 balls to the National Lottery’s original 49, which tripled the unlikelihood of anyone claiming the main jackpot.

Camelot also increased the maximum number of weeks in which the jackpot can be rolled over. Previously, the jackpot could only be missed four times before the top prize was split up among those who came closest to picking the correct numbers. Now the lottery can keep rolling over until the jackpot reaches £22m.

A group of disgruntled lottery players has formed a Facebook group calling for a boycott of National Lottery sales. Camelot has defended its changes, claiming it had made it easier for players to win smaller prizes, but player dissatisfaction was reportedly responsible for much of last year’s 6% decline in National Lottery sales.

Camelot also handles UK sales of the EuroMillions lottery, which has also been rolling over with reckless abandon, so much so that Tuesday’s drawing is offering a hefty £167m prize. Should a single UK winner claim the jackpot, it would represent a new record, topping 2011’s £161.6m jackpot claimed by a couple from North Ayrshire.

Lottery betting operator Lottoland is likely on the fence about whether it wants one of its players to correctly select this week’s EuroMillions winning numbers. The company recently took out €120m (£106m) worth of insurance to cover the potential of a nine-figure payout, but that would still leave the company £61m out of pocket should Lady Luck smile on one of its players. For the record, the odds of winning it all on Tuesday are around 140m to one.