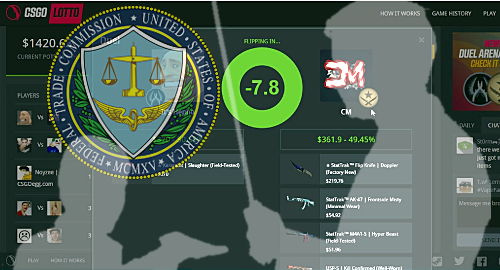 A pair of eSports promoters has pretty much gotten away with shilling for a skin betting site without disclosing their ownership of said site.

On Thursday, the Federal Trade Commission released a consent order of a settlement it reached with Trevor Martin (aka TmarTn) and Thomas Cassell (aka ProSyndicate) for using their social media status to promote skin betting on the CSGOLotto site without revealing that they each owned a 42.5% stake in the site.

Over a year ago, an observant eSports fan revealed that Martin and Cassell were posting YouTube videos showing them betting ‘skins’ – virtual goods earned via game play or purchased with cash – on CSGOLotto, while leaving viewers with the impression that the site was something they just happened to stumble across, but gosh golly wow, was it cool.

The pair also paid four- and five-figure sums to other individuals with large YouTube followings to promote CSGOLotto without requiring these YouTubers to disclose that their endorsements were bought and paid for.

The FTC’s Bureau of Consumer Protection investigated these allegations and submitted a draft complaint to the FTC, which determined that there was sufficient evidence that Martin and Cassell had violated the Federal Trade Commission Act. However, this complaint has been set aside following the settlement, which is about as meek a punishment as a federal agency is capable of meting out.

Should Martin or Cassell fail to live up to these requirements, they could be liable for civil penalties and other relief. Or perhaps just another stern talking to.

The FTC’s acting chairperson Maureen Ohlhausen issued a statement saying consumers “need to know when social media influencers are being paid or have any other material connection to the brands endorsed in their posts.” Ohlhausen claimed the settlement “should send a message that such connections must be clearly disclosed so consumers can make informed purchasing decisions.”

The CSGOLotto affair was just one of a number of high-profile scandals that cut the legs out from under the skin betting sector last summer. The pressure eventually led developer Valve Corp to order skin betting sites to stop accessing its Steam marketplace, via which skins were traded or purchased in order to have currency to wager on the betting sites. Many skin betting sites folded their tents shortly thereafter.

Last September, the UK Gambling Commission filed criminal charges against a different pair of YouTubers for illegally promoting gambling on eSports titles. The pair originally pled not guilty, but ultimately admitted that it was a fair cop and paid a combined £265k in fines and costs.