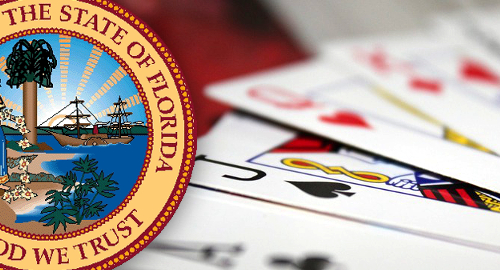 Two Florida pari-mutuel cardrooms are in hot water with state gaming regulators for continuing to offer ‘designated player’ card games in violation of the settlement the state reached with the Seminole Tribe this summer.

On Monday, Florida media outlets reported that the state’s Department of Business and Professional Regulation (DBPR) had filed administrative complaints against Pensacola Greyhound Racing and the Sarasota Kennel Club for continuing to offer house-banked card games in their cardrooms.

The so-called ‘designated player’ games allow one player at a card table to serve as the bank, meaning the other players are ostensibly playing against this single player, although courts have ruled that the games are essentially house-banked games in all but name.

The settlement the Seminoles reached with the state in July called for regulators to take “aggressive enforcement action” against non-Seminole gaming venues offering house-banked games. The state’s willingness to act against infringing pari-mutuels offers a hint of the state’s unwillingness to see this settlement – which came after years of setbacks and legal fights – fall apart at the seams.

Seminole attorney Barry Richard told CBS Miami that the state’s actions gave him “a high level of confidence they appear to be conscientiously and in good faith abiding by the settlement agreement and by [US District} Judge Hinkle’s decision.” That November 2016 decision confirmed that the state had violated the tribe’s original gaming compact by allowing the tracks to offer the player-banked games in the first place.

The Pensacola facility is run by the Poarch Band of Creek Indians, and a spokesperson told Florida Politics’ Jim Rosica that its player-banked games “were approved by DBPR.” The spokesperson said the track had “requested clarification from DBPR on procedures so that we can alleviate their concerns.”

Given the value of the player-banked games to the tracks’ bottom line, they were more or less expected to mount some kind of legal fight against the language in the new gaming compact. But should the courts side with the DBPR, the two tracks in question could face unspecified fines as well as potential revocation of their operating permits.