Home / Poker / Right or wrong? The flipside of the Patrick Leonard angle 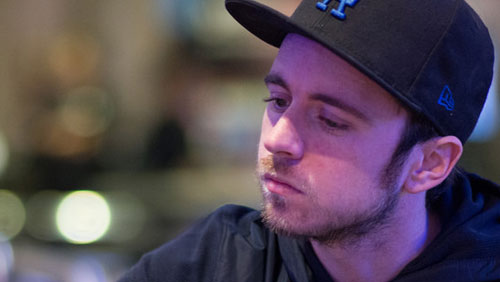 Lee Davy shares his thoughts on the controversy surrounding a hand played between Patrick Leonard and Luigi Andrea Shehadeh during the PokerStars Championship Barcelona.

What do you think of Patrick Leonard?

When I heard on the poker grapevine that he was angle shooting during his deep run in the PokerStars Championship Barcelona Main Event, my gut reaction was that people were wrong.

If you place Leonard in a fMRI machine and look closely, you will see his cerebral blood flow hurrying poker chips around his brain. Poker is his life, and unlike most of his peers, Leonard is always prepared to open his heart and talk honestly about the way the game makes him feel.

So there was a bias in my thoughts when I watched the coverage of the hand in question.

One of the reasons I am attracted to Leonard’s energy is because he is English. I get him. When I was a nipper, I moved from England to Wales and suffered years of racial abuse at the hands of the ignorant.

In May, people intimated via social media that I was behaving in a racist manner by using the words ‘whipping’ and ‘lynching’ in an article centred on the antics of Kevin Hart during the Super High Roller Bowl (SHRB).

My immediate impulse was anger.

I raised the drawbridge, the portcullis fell, and I filled the barrels with tar. The allegations were ridiculous and over the top. Worse, I thought it was personal.

Had my accusers understood context, and knew me personally, there wouldn’t have been any accusations, and I thought about this when watching the controversial hand.

I figured he was angle shooting but remembering the importance of context, I decided to reach out to Leonard for comment but stopped when I saw he had recorded his thoughts in a video.

Providing opinion without context is difficult. But the poker community doesn’t care about context. Poker players love their pitchforks and torches. There seems to be a voyeuristic desire to increase the suffering of others. Or maybe, it happens everywhere, accentuated by the walls of social media that protect people from the head butts that fly around in ‘real life.’

When you listen to the context that Leonard provides, his decision to behave in the way that he did, and use the words that he did (“you got it”), start to make a lot of sense, that is if you believe Leonard.

If you know him or have had any dealings with him, then you’ll believe him. If somewhere down the line, he has rubbed you up the wrong way, the odds are you won’t believe him.

It’s, for this reason, I think it’s interesting that at first glance I thought his angle shoot was acceptable. It’s as if, I have split poker players into three categories: the good, the bad, and everyone else.

For this reason, Kevin Hart was allowed to behave the way he did during the SHRB. The comedian is the epitome of goodness. When he dry humps a poker table and belittles his fellow players, we find it funny. Had an Eastern European with a face like a breezeblock behaved like that, the pitchforks and torches come out to play.

Is There a Conspiracy?

My opinion of Leonard being a good guy is so strong I have difficulty believing nobody else can see it. So the storytelling in my brain kicks in. I start to wonder if this isn’t a big conspiracy by PokerStars to deliberately tarnish the name of an ambassador of their rival online site.

Watching the Leonard video, I got the vibe he was thinking the same thing. Daniel Negreanu, the leading man in the PokerStars ambassadorial hierarchy, had a lot to say on the matter and even posted a poll on Twitter. Vanessa Selbst, the leading woman in the same setup, didn’t go as far as to post a poll, but the world’s best female player also added her opinion on the debate.

Leonard stated in his video that PokerStars promoted the clip, and it received over 250,000 views. In the poker industry, reputation is everything, and something like this can ruin people with lesser reputations than Leonard.

PokerStars didn’t call a team meeting to whiteboard the best way to assassinate Leonard’s character, but the behaviour of certain factions related to the PokerStars brand shows that it’s possible, and people representing brands have to be extremely careful when playing poker under televised or live stream conditions.

Why do people feel the need to stick the virtual knife in?

I understand the hypocrisy; I am, after all, writing about it, but this is my job. I’m not setting out to hurt someone to bathe in pain and suffering. But I see this all the time in our industry. Even Leonard talks in the video of his enjoyment of the same social media massacres that he starred in this week.

Am I soft in wanting people to deal with these things differently?

Why didn’t people DM Leonard, he is one the easiest people in the world to reach? After listening to his context, you can then make your mind up. There are times when a witch hunt is in order, but this very clearly isn’t one of them.

The Dangers of Social Media

After interviewing countless professional poker players, I conclude there is a lack of professionalism when compared to other professional sports and gaming environments. It’s a habit that forms when players begin to win. However, I can’t think of a more ‘professional’ poker player than Leonard. He has created the most efficient and effective poker stable in the world, and the time he puts into his learning is right up there with the players who have real grit.

But in this case, Leonard wasn’t professional.

If you are interested in Leonard and have followed his career, from journalist to PocketFives World #1, you know he’s a sensitive soul. During his video, Leonard also admitted his impulsivity.

A sensitive and spontaneous soul, deep in the PokerStars Championship Barcelona Main Event should not have been checking his messages on social media

because reading words that cast you in the role of villain, in a way that directly opposes your values – will affect your game. It’s not just Leonard who falls for this trap. There are poker players who use Twitter so much I fail to see how they ever play any hands.

Leonard admits to making plenty of mistakes in the aftermath of the incident. The partypoker pro admitted it was wrong to be impulsive; it was out of order to react angrily to his dissenters, especially the writer Steve Ruddock, and most telling of all, he admitted that had he watched the clip before reacting, he would have thought he was angle shooting.

But he didn’t mention scouring social media and wading through the junk as a mistake.

Inside The Mind of a Genius

Back to that fMRI machine again, and you don’t need one to see what’s going on inside Leonard’s brain because he is not shy in sharing, and his video was another example of this.

Leonard goes into great depth to apply context to the angle shoot, and I for one, found it to be incredibly insightful. I wouldn’t even call myself a recreational poker player these days, but for those that do, they must have learned so much after Leonard explained his thought process behind his behaviour as a way to extract live tells he could, and did, use in the future.

In being so open, he gave his opponents an insight into the way he plays live poker, and he didn’t have to do that to get his context across.

Because if you know Patrick Leonard, you know he is one of the most honest people you will find in the industry.

Please do, because everyone makes mistakes, and we should forgive those who admit when they are wrong and are humble enough to ask for a second chance.