Home / Poker / Did you hear about the soccer star, warehouse worker and the Kaiser? 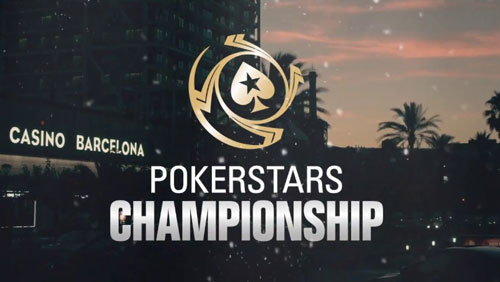 The PokerStars Championship Barcelona comes to a close with a trio of tales featuring a soccer star, warehouse worker, and a Kaiser.

All too often there is a lacuna in our poker narrative. It’s the fairy tale, the goddam fairytale. There aren’t enough damsels in distress, hardly anybody has hair long enough to drop outside of a castle window, and warehouse workers don’t win million dollar prizes after qualifying online for $200.

But the PokerStars Championship Barcelona was different.

The scriptwriters nailed it.

When the 1,682 players sat down to compete in the €5,300 Main Event, there was more chance of animism coming back into vogue than the Swedish warehouse worker, Sebastian Sorensson, taking the thing down.

Sorensson won his seat playing on PokerStars for $200 from a bankroll created from scratch gambling on Donald Trump acceding to the position of Presidency, another fairytale that came true.

And what happens when the impossible becomes a reality?

“I will probably buy a whole bunch of nice shit,” said Sorensson.

I would also ring your warehouse foreman and tell him you have a new job as a creator of the most incredible stories.

Gerard Pique became the second celebrity to make a deep run in a side event in Barcelona after DJ Zedd finished third in a €5k Turbo recently.

The Barcelona and Spain football star finished fourth in the €25k Single Re-Entry High Roller. Pique has been competing in the Barcelona event since 2011 and has registered two third place finishes in €5k & €2k events in the past.

But this one was different.

Pique was competing with the very best players in the world, including the former One Drop winner Dan Colman, and the most recent €25k Single Day High Roller Winner, Stephen Chidwick.

Chidwick nearly accomplished back-to-back victories, finishing in third place. Once the British star hit the rail, Pavel Plesuv and Ben Tollerene chopped the remaining money, and Plesuv won the flip for the title.

The Moldovan has had impressive results in Barcelona. In 2016, he finished 8th in the Main Event for €165,950, and 5th in the €10k High Roller for €134,100. He also came close to winning a World Poker Tour (WPT) title finishing second to Javier Zapatero in Season XIV Prague.

Tollerene is a high stakes genius with close to $4.7m in live tournament earnings. This is his first major result in Barcelona; he won the €50k in Panama earlier this year for half a million dollars and a $10k Turbo in the Bahamas for $150,000 at the turn of the year.

It seems Pique is a better poker player than mind reader.

On July 23, Pique took a snap of himself with Neymar Jr with the words ‘Se Queda’ written beneath meaning ‘Stay’. Not long after, Neymar Jr left to join Paris St Germain in a world record £199m transfer deal.

Earlier this week, when commenting on Lionel Messi’s delay in signing a new deal, Pique assured the fans that Messi would remain a Barcelona player.

Winamax sponsored pro, Sylvain Loosli, is the proud owner of €236,400, after winning the €10k Pot-Limit Omaha (PLO) High Roller. Loosli made a deal with his heads-up opponent Pedro Zagalo, before going on to win the trophy.

The event attracted 111 entrants, and Loosli, who won the €50k event in Barcelona two years back, leapfrogged Fabrice Soulier into #5 spot in the France All Time Money List on The Hendon Mob, with lifetime earnings of €6.3m.

Other players who delved deeper than Dwarves in the Mines of Moria were Yuri Martins (9th), Emil Patel (10th), and Peter Eichhardt (12th).

Other players who came close to the top of this particular pile of perfect poker players were Sam Grafton (11th), Parker Talbot (13th), and Jake Cody (27th).