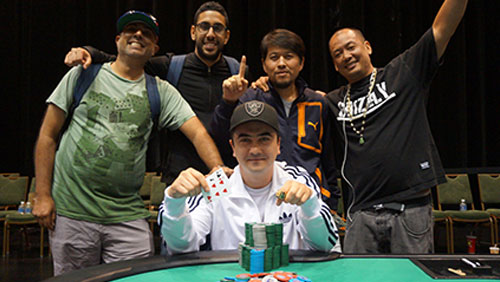 3: Barrels of a live tournament flavour including a round up from the World Series of Poker Circuit in Harrah’s Cherokee, schedule details for the Wynn Poker Fall Classic, and a new poker tour from the Poker King Club in Asia.

The Los Angeles based entrepreneur and part time poker player, topped a field of 1,022 entrants to capture the $283,597 first prize, the second largest win of his career, outside of the WPT Legends of Poker event he won in Season XIII that netted him over half a million bucks.

Arutyunyan came into the final day 2/19 in chips but managed to collect every single one of them by the day’s end. The 33-year-old becomes the first player to reserve a seat in the 2018 WSOP Global Championships, an event his good friend Sean Yu just tucked away for $300,000 at the same casino. Yu was standing on Arutyunyan’s rail like a faithful dog, as was Arutyunyan when Yu was taking down his bracelet.

The second person to bag a seat in that Global Championships is Todd Mercer. Mercer made five cashes, two final tables, and won a ring and $121,495 after taking down the opening event of the festival, to secure the spot reserved for the Casino Champion.

The next US stop for the WSOPC is Foxwoods Resort Casino, Connecticut, August 17 thru 28. The next international tour stop is the Holland Casino, Amsterdam August 25 thru Sep 2.

Marketing for the Wynn Poker Fall Classic got an early boost last month, when the Swedish online poker room, Unibet, announced plans to send 200 online qualifiers to the Wynn in Las Vegas to compete in the $1,100 buy-in, $400,0000 Guaranteed European Open.

The 12-day poker extravaganza runs from Sep 27 thru Oct 8, featuring $1.3m in guaranteed prize pools, and culminating in a $1,600 Main Event.

Here are the events with the largest guarantees.

There is also a $600 buy-in, $60k GTD No-Limit Hold’em Seniors event for the over 50s, and a whole host of satellites for the live events. However, non-Hold’em fans will be sorely disappointed, as there is nothing but Cadillacs parked in this particular drive.

The Poker King Club will begin a new live tournament series in September.

Taking the name of their parent Suncity Group, the Suncity Cup features an HKD$8m prize pool (USD$1m) operating in a variety of popular casino locations in Asia.

Details are sparse, but Poker King Club has announced stops in the Philippines, South Korea, and Macau. Each will feature an HKD$6,000 (USD$770) buy-in Main Event.

The first event takes place on the South Korean Island of Jeju, Sep 24 thru 30. The Solaire Resort & Casino, Manila plays host Oct 13 thru 16, and the Venetian Macao finishes things off 23 Nov thru 2 Dec.

The well-known Asian poker player/businessman Winfred Yu is the CEO of the Poker King Club, who counts the likes of Phil Ivey and Tom Dwan as supporters of the outfit.