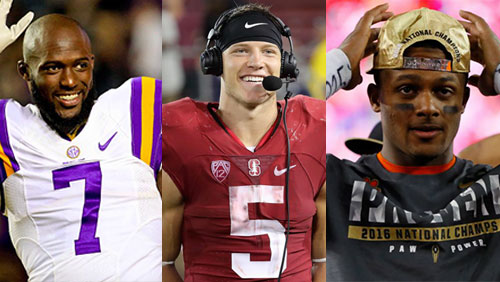 Being picked higher obviously does not guarantee better results on the field as a rookie, which is why the NFL Draft is such a gamble. This year’s crop of first-year players will be intriguing to watch, led by two running backs and one quarterback listed as +400 co-favorites to be named 2017 NFL Offensive Rookie of the Year.

Oddsmakers have pegged Leonard Fournette of the Jacksonville Jaguars and Christian McCaffrey of the Carolina Panthers as the running backs most likely to win the award along with quarterback Deshaun Watson of the Houston Texans.

Fournette was selected fourth overall by the Jaguars out of LSU while McCaffrey went eighth to the Panthers from Stanford. Watson led Clemson to the national championship last year in an upset of Alabama before he was chosen 12th overall by the Texans.

The first offensive player picked in the 2017 NFL Draft was North Carolina quarterback Mitch Trubisky, who went to the Chicago Bears second overall. The Bears moved up one spot in a draft-day trade with the San Francisco 49ers to secure Trubisky. Chicago had also signed Mike Glennon as a free agent in the offseason to replace the departed Jay Cutler, but Trubisky could end up winning the starting job with a strong showing in the preseason. Trubisky is +1000 to win Offensive Rookie of the Year honors.

Another player to keep an eye on who is replacing a mainstay for a franchise is running back Dalvin Cook of the Minnesota Vikings. Cook was selected in the second round by the Vikings out of Florida State, and he is currently battling veteran Latavius Murray for the starting job held previously by future Hall of Famer Adrian Peterson. With Peterson off to the New Orleans Saints as a free agent, Cook may have some value at +900.

Two more players who could make a run at the award are running back Joe Mixon of the Cincinnati Bengals and wide receiver Corey Davis of the Tennessee Titans. Both Mixon and Davis are +1200, with the latter chosen fifth overall by the Titans. Mixon is a very talented player as well, but he fell to the second round due to character concerns.