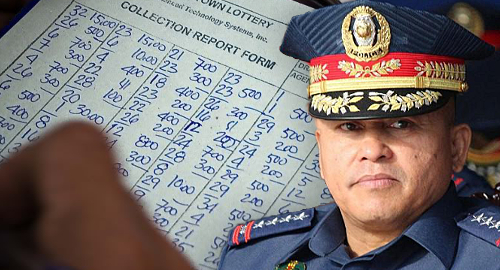 Philippine police officials have been given two weeks to eradicate illegal gambling or turn in their badges, after a top cop blew his stack.

On Monday, Philippine National Police (PNP) chief director general Ronaldo ‘Bato’ dela Rosa told reporters that all PNP regional directors had been ordered to “go all out against illegal gambling.” Dela Rosa (pictured) said if the order proved too much for his subordinates, “I will relieve them.”

Dela Rosa said the new order applied equally to regional directors, provincial police directors and chiefs of police. Each stop along the upper registers of the chain of command had been given the authority to relieve “those who are not performing, those who are not acting on my directive.”

Dela Rosa said he was responding to Philippine President Rodrigo Duterte’s directive to “intensify the fight” against the “social menace” of illegal gambling, in particular operators of the jueteng numbers games that directly compete with the Small Town Lottery (STL) operations of the Philippine Charity Sweepstakes Office (PCSO).

Police chiefs have been given all of 15 days to issue certifications attesting to the lack of illegal gambling in the areas under their control. Dela Rosa said “15 days is enough” to accomplish the task, particularly if the police get help from legitimate STL operators.

However, Dela Rosa insisted that his ‘get tough or get lost’ edict was not prompted by PCSO general manager Alexander Butan’s recent warning that the PCSO would cut its financial contributions to the PNP by 50% due to the force’s allegedly “anemic” efforts to stamp out jueteng operators.

The PNP boss said police could learn to live without the PCSO’s financial help, and he also pushed back against the lottery bosses laying all the blame for jueteng’s popularity at the feet of the police. “You’ve been using us as a whipping boy in this illegal gambling problem … don’t use us as a scapegoat; we will do our job.”