The World Poker Tour is following the design set by 888Poker by adding a shot clock in all Season XVI Main Events, as well as working with casino partners to move to eight-handed play for the final ten tables of showpiece events. 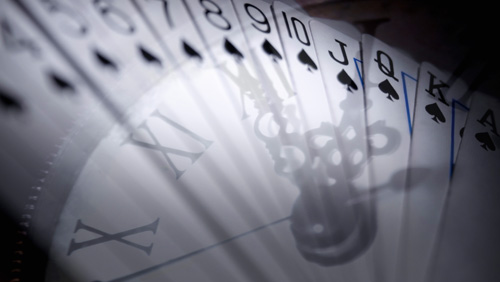 Live poker is tied to a mooring.

It’s in a coffin, and the players are to blame. The same young Wizards who make their online decisions in seconds, act as they’ve just been circumcised when it comes to the speed of their movement in the live realm.

The lid needs removing, and live tour operators, have been prising it off, nail by nail. Finally, the air is getting in. Lungs are being filled with the good stuff. Change is in the air.

The World Poker Tour (WPT) is the second major live tournament operator to announce prophylactic plans to prevent poker from continuing to flap about the world of sport and gaming like a hooked trout.

The WPT is installing a shot clock in all of their Season XVI Main Events, with the televised stop at Choctaw being the first to trial the new changes.

The WPT will partner with Protection Poker, to introduce The Action Clock, a shot clock that provides players with a 30-second countdown to make their move or their hand is dead.

The WPT and Protection Poker has used the Action Clock at the WPT Championships and selected WPT500 events. The feedback has been more of the same. The WPT is delivering the goods.

The move comes a month after 888Poker broke the mould when they announced the introduction of a shot clock in all 888Live Main Events and High Rollers.

The WPT doesn’t go as far as 888Poker, preferring to introduce the Action Clock when the action is one table away from the money bubble. I don’t like the idea of a halfway house like this. Let’s just move all-in and make the Action Clock a part of the DNA like a deck of cards, chips, and a dealer.

Once the Action Clock comes into play, players will have 30-seconds to decide. If they are struggling, they can use one of four 30-second time extension chips.

After the action dissolves down to the final three tables, the time bank chips are reset with everyone provided with six. The same happens at the final table with each of the six players beginning with eight.

In another move designed to speed up the action, the WPT also announced plans to work extensively with casino partners, to switch to eight-handed tables for the final 10-tables of WPT events.

The WPT and 888Poker have unmoored from traditions as a way of placing the paddles on the flat chest of live tournament poker: PokerStars, partypoker, World Series of Poker (WSOP) – over to you.