A short round-up of the winners and losers emanating from the PokerStars Festival Main Events in both South Korea & Lille.

In London, when terror strikes, the locals react by telling everyone to keep calm and have a cup of tea. In South Korea, upon hearing the news that North Korea has promised to send a nuclear warhead into the heart of the USA if they try to remove Kim Jong Un from power, a move that would almost certainly have cataclysmic consequences for South Korea, they play poker.

Life goes on, even in this mad, mad, world of ours.

The $1,500 buy-in event attracted 285-entrants; creating a $368,902 prizepool, and rewarding 39-players with a minimum payout of $2,544. The final table boasted a single Korean based player, with three of the last eight hailing from the land of the rising sun.

From the start to the climax of this event all the talk was of Ko. The man with a video game-kick ass name and evil warlock stare to round it off doesn’t speak much English. The PokerStars blog reached out to the high stakes pro Gary Pepper to learn more about Ko, and the words ‘Japanese Poker Hero’ fell out of the largest hole in his face.

The Japanese Poker Hero came into the final table of eight with a dominating chip lead, but three and a half hours later, he would enter heads-up with a slight chip disadvantage, yet all the experience, competing against the rookie, Han, for all the chips.

The heads-up battle lasted for two hours, during which time Han never once surrendered his chip lead. The final hand saw Ko moving all-in with the delicious looking JThh, only to be called by the dominating all-black QJ. The PLO wizard, and high stakes cash game hero had to make do with a second place finish but had a smile on his face throughout.

The win was the highlight of Han’s Hendon Mob scoresheet with a 20th place finish in the 2014 Asia Pacific Poker Tour (APPT) Main Event in Auckland for $4,010 his previous best.

Moving from Korea to Lille, and Philippe Le-Touche has taken down a bumper PokerStars Festival Main Event in Lille. 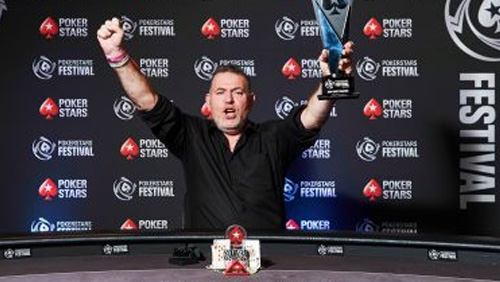 Le-Touche defeated a field of 800 entrants in the €1,100 buy-in Main Event that contributed €768,000 to the poker economy. It was the largest score of Le-Touche’s career. His previous best came with a fifth place finish in the France Poker Series (FPS) Main Event in Deauville last year, where he finished one spot above a certain Mr Benjamin Pollak for a €30,700 score.

Other Mustangs that rode hard into the money phase of this thing included the World Series of Poker (WSOP) bracelet winner, Adrian Apmann (16th), and the ever-present French live grinder Paul Testud (71st)

The next PokerStars Festival takes place in Manila July 28-Aug 7.