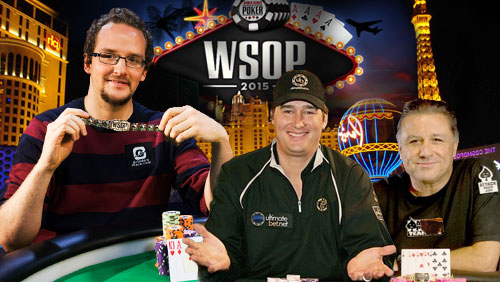 Lee Davy shares his round up of all the action from the 29th day of the 46th Annual World Series of Poker including victory for Adrian Apmann in the Extended Levels event, Eli Elezra leading a Stud final table, and Phil Hellmuth on course for bracelet #15.

The Germans have another bracelet after Adrian Apmann was the only man left with a seat in the slog that was Event #42: $1,500 Extended Play No-Limit Hold’em.

1,914 entrants made sure the World Series of Poker (WSOP) will include this in their roster of events next year, and the Austrian based German takes the lion’s share of the $2.5m prize pool.

I was talking to Dominik Nitsche a few days ago, and I told him that I felt he had the time, ability and heat, to one day surpass Phil Hellmuth at the top of the WSOP bracelet charts.

“Not if he keeps winning them.” Said Nitsche.

He makes an excellent point.

Hellmuth is only 50-years of age. He isn’t going anywhere soon, and he keeps mopping up. He has already added bracelet #14 to his trophy cabinet, after victory in the $10,000 Razz Championships, and he has a healthy stack heading into the third day of action in Event #47: $2,500 No-Limit Hold’em.

When Hellmuth gets a stack, he is difficult to shift. It will be interesting to see how this one develops. It won’t be easy though. Simon Deadman is searching for this second final table of the summer, Nam Le and Barry Shulman have chips, as does the former WSOP Main Event champion Carlos Mortensen.

WSOP bracelet winner David ‘ODB’ Baker has made his second final table of the summer. He leads the final table of six in the $50k Poker Player’s Championship (PPC), an event he finished 10th in 2012.

Baker leads the final six players. Bracelet winner Mike Gorodinsky is making his third final table of the summer, and will start in second place, Jean-Robert Bellande will be looking to prove a few doubters wrong by carving his place in history, and the likes of Chris Klodnicki and Dan Kelly also book their berth.

The most interesting name to pop up is Ben Sulsky. More known for his online cash game exploits, Sulsky admitted to PokerNews that he is not the most experienced player at this format. Chips may be fumbled, but Sulsky knows how to put them into a pot without losing them. He starts in fifth place.

The players who cashed were:

Event #48: $1,500 Seven Card Stud experienced a 31% drop in field size this year. None of that matters a jot to Eli Elezra. The two-time bracelet winner is hoping to make it number three. He has the chip lead in what is his third final table of the summer. Hot on his heels is Allen Cunningham. He is cashing for the third time this year, making his first final table, and hoping to become a six-time WSOP champion.

1,655 entered Event #45: $1,500 No-Limit Hold’em, and two remain as the event spills over into a fourth day of action. Upeshka Desilva has a 5:1 chip lead over the Irishman Dara O’Kearney in that one.

Here are the other finishing positions

A second event that moved into an unexpected fourth day was Event #46: $3,000 Pot Limit Omaha 6-Handed. 682 have been whittled down to a final four, and keep your eye on Vasili Firsau to win his first WSOP bracelet in that one.

There was also a dip in field size in Event #50: $10,000 Limit Hold’em Championships – this time by 4%. 117 players entered and there is so much cream left in the event it’s sickening.

Yegor Tsurikov has the lead, but Anthony Zinno and Sorel Mizzi are not that far behind. 74 remain after the end of Day 1. 18 players will get paid, and $291,456 awaits the winner.