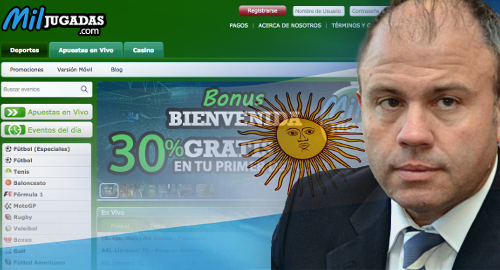 Argentine authorities have frozen the bank accounts of a local online betting site they claim to be operating without authorization.

On Wednesday, the Public Prosecutor’s Office in Buenos Aires ordered the suspension of the Miljugadas1.com domain for organizing and promoting gambling to the city’s citizens without local authorization.

Prosecutor Martin Lapadú (pictured) also ordered the site’s bank accounts frozen and for financial institutions to refrain from processing any transactions on behalf of the site. Lapadú warned internet service providers that failure to block the Miljugadas domain could result in charges for assisting an illegal gambling operator.

Under Argentine law, illegal gambling operators can face prison sentences of between three and six years. Miljugadas lists its office address in the province of Misiones, but Lapadú says he’s yet to identify the site’s directors and representatives.

BUSINESS AS USUAL?
Miljugadas appears to be taking the development in stride, as the site remains online at present, and the site’s Twitter feed has yet to acknowledge the prosecutor’s order. It probably helps that this is not the first time that Miljugadas has faced the ire of Argentine officials.

Miljugadas held a license issued in Misiones but this was revoked by the Provincial Institute of Lotteries and Casinos (IPLyC) in November 2012 for “breaches of contract,” including the site’s alleged failure to maintain a ‘mirror’ server that allowed IPLyC to monitor all wagers for signs of problem gambling activity.

The IPLyC launched its own online gambling site, Misionbet.com.ar, in 2015 but this was shut down in May by none other than Lapadú, who claimed the site was violating the law by accepting wagers from punters based outside the province.

While the IPLyC is still fighting with Lapadú to ensure the relaunch of the Misionbet site, IPLyC legal eagle Daniel Esperanza hailed Lapadú’s action against Miljugadas and expressed hope that this would be the first of many such actions against online gambling sites not run by the IPLyC.

IPLyC president Eduardo Torres, who has long railed against international online gambling competitors such as PokerStars, called Lapadú’s action the right thing to do, “but extremely insufficient.” Torres went as far as to suggest Lapadu’s action was more about optics than a concerted effort to deal with online gambling rogues.

FEDERAL REGULATION COMING?
The IPLyC held an online gambling conference last month and Torres said he was keen to see some consensus on online gambling regulation that benefits the local monopolies, but so far has been unable to convince his provincial counterparts to get on board.

The national government appears to be making a push to create a federal agency to regulate Argentina’s gambling market. Fabian Rodriguez Simon, an advisor to President Mauricio Macri, recently told local media that a federal regulator would allow each province to decide what type of online activity would be permissible within its borders.