Home / Business / Will the Supreme Court give gambling back to the States? 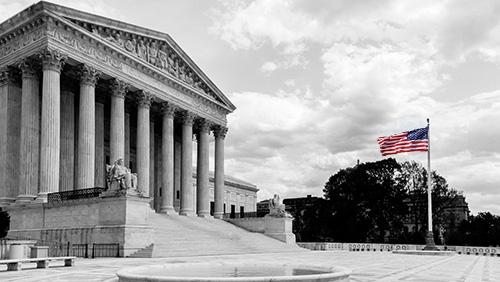 Should betting on sports, or any other form of gambling, be legal?

The first question is: Who decides?

Until a few decades ago, no one would have thought the decision-maker was the federal government. In fact, for the first 150 years of American history, Congress had almost no role in matters that affected people’s daily lives. It was entirely up to the states to decide not only whether gambling should be a crime, but whether anything should be a crime.

Since the birth of television, it has become difficult to appreciate that the federal government is a government of limited power. If it is not in the U.S. Constitution, Congress, federal courts, administrative agencies and even the President simply do not have the right to tell people what they can and cannot do in their private lives. It was, and remains, except to the extent they have voluntarily given up some of their power, state governments that have unlimited power.

In agreeing to hear New Jersey’s appeal of its right to have sports-betting, the U.S. Supreme has signaled that it might begin telling Congress that it has gone too far in stepping on states’ rights.
That term got a black eye during the civil rights era. But it is still true that most laws are state laws, and the federal government is not supposed to tell the states what laws they can and cannot enact.

The Tenth Amendment reads, in full: “The powers not delegated to the United States by the Constitution, nor prohibited by it to the States, are reserved to the States respectively, or to the people.” The drafters of the Constitution, and the Supreme Court, said this language was unnecessary. But the original 13 colonies wanted to make sure there would never be a dispute over, say, whether Congress could tell a state that it could not change its public policy toward gambling.

In the New Jersey sports-betting case, the state’s lawyers used the esoteric term “commandeering.” I would have gone with “federalism.”

Either term belittles the potential impact of this case. At the very least, the Supreme Court will probably return gaming law to what it was half-a-century ago: a state, not federal issue.

But it may go much further. Where does the federal government get the power to tell New Jersey that it has to continue to outlaw sports-betting? Should Congress be allowed to tell states that they have to keep any private conduct illegal?

Today, 44 states have medical cannabis laws. Yet federal law treats marijuana as a Schedule 1 drug under the Controlled Substances Act, meaning the Food and Drug Administration has determined it has no medical use.

Where is the federal issue in telling the states they are wrong? Is it enough that Attorney General Jeff Sessions thinks smoking pot is immoral?

The New Jersey sports-betting case will have to directly face the question of moral pluralism. Although the goal of the U.S. Constitution was to create one nation, it was not supposed to step on the rights of the states to have their own public policies toward moral issues. States were not only allowed, but encouraged to experiment. Utah, for example, decided to outlaw all gambling. Its bordering state, Nevada, went a different route. If either approach succeeded wildly, the other states could copy or try a modified version for themselves.

Conflicts between the federal government and the states are not always about differing views on morality. Sometimes the conflict arises due to the problem of having to get both a state legislature and Congress to change their laws, at the same time.

In the years immediately following passage of the Professional and Amateur Protection Act (“PASPA”), an argument could be made that New Jersey agreed with the federal prohibition on sports-betting. PASPA gave New Jersey, and New Jersey only, one year to pass a law allowing sports-betting. Even though the issue was not put before the state’s voters at that time, there were lawsuits and lobbying. When the New Jersey Legislature failed to pass a statute or referendum, there was no general uprising of discontent.

But the same cannot be said now of New Jersey and its voters. The amendment to the State Constitution authorizing sports-betting was approved at the polls overwhelmingly. There was similarly little dissent in the New Jersey Legislature when it passed, twice, enabling acts.

If Congress were as efficient as the New Jersey Legislature, there would be no problem. Congress could amend PASPA to allow only New Jersey to have sports-betting. But Republicans won’t let the issue even be debated. Why should anti-gambling conservatives have the right to impose their morality on other states?

The problem for legal gambling started in the 1890s, when the states asked President Benjamin Harrison and Congress to help them stop Louisiana lottery tickets from being sold in their states. For the first time, Congress used its power to regulate interstate commerce to prevent a legal product from crossing state lines.

By the 1970s, the Federal Communications Commission decided that every form of gambling was a “lottery.” One of my first legal opinions as a gaming lawyer was convincing the largest radio station in Los Angeles that poker was not a “lottery,” so it would broadcast commercials for state-licensed card clubs. I was less successful with a TV station in Las Vegas in an ad for the old Tropicana, because it showed the word “casino” reflected backwards in a pool of water.

PASPA, passed in 1992, is the most extreme example of federal control of state gambling. A dozen states with existing sports-betting, from jai alai to calcuttas to sports books, were grand-fathered-in. Every other state was told they were out of luck.

Imagine a statute passed in 1928, declaring that it was a felony to offer movies with sound, but exempting states that were already showing talking pictures. Regardless of whatever changes occurred in technology or in the way society viewed films, only a dozen states could have talkies.

I’m hoping the Court will give us a clean decision. The worst result would be a ruling that New Jersey only has the right to decriminalize sports-betting, but not regulate it. Other states would follow, with some truly weird statutes eliminating laws against sports-betting, and who knows what else.

Nevada and Delaware changed their state laws, allowing their governors to enter into an agreement to pool online poker players. Once decisions about whether to legalize gambling are returned to the states, there would be no reason for the federal government to interfere if other states entered into interstate and even international agreements. The Wire Act itself could be challenged, since there is no reason to believe that licensed, regulated sports-betting is more dangerous than licensed, regulated online poker.

Freed of out-dated federal restrictions, states would be free to make their own decisions about Internet gambling.

And if Utah did not want to join in, it would be its right to sit out the games.