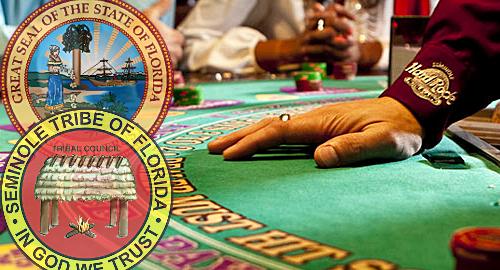 Florida has settled its longstanding feud over gambling rights with the state’s Seminole Tribe, for the time being, at least.

On Wednesday, state regulators announced they had reached a deal with the Seminoles, who operate the state’s brick-and-mortar casinos under the Seminole and Hard Rock brands. The parties claim this resolves the lawsuits that the two sides have filed against each other in recent years over who has the right to offer certain types of gaming in the state.

The deal extends the Seminole’s monopoly over blackjack and other house-banked card games to 2030 while requiring the state’s pari-mutuel racing and card room operators to cease offering so-called ‘designated player’ games that are house-banked games in everything but name.

In exchange, the Seminoles will continue making monthly revenue-sharing payments to the state. Ever since the parties went to the mattresses a couple years ago, the tribe had been paying the state’s share into an escrow account, which now contains $220m. The deal allows the state to access these funds, plus a further $120m over the next fiscal year.

However, the deal requires the state legislature’s approval, and consensus among Florida politicians is about as rare as cargo shorts in South Beach. Florida Gov. Rick Scott reached a deal with the tribe in 2015 on a new gaming compact that was never ratified by that very same legislature.

And while the deal requires the Department of Business and Professional Regulation to take “aggressive enforcement action” against non-tribal operators offering house-banked games, the tracks and card rooms will likely lawyer up in a bid to preserve their right to offer the games.

Seminole attorney Barry Richard said “there’s no loser” in Wednesday’s deal, a sentiment that won’t be shared by the state’s other gaming operators. Bottom line: the state and the tribe have celebrated victory before, only to have that victory dry up faster than the inside of Marco Rubio’s mouth, so only time will tell.

HOW’D WE GET HERE?
In 2010, the tribe inked a gaming compact that allowed them a 20-year monopoly on slot machines in the counties in which their casinos operate, as well as a five-year monopoly on blackjack. Before that five-year period ended, state gaming regulators authorized the tracks and card rooms to offer the designated player games.

The tribe filed a lawsuit accusing the state of violating the compact, while the state demanded the tribe stop offering blackjack after the five-year monopoly expired. Last November, a federal judge ruled that the state had indeed violated the compact and ordered the tribe’s blackjack monopoly extended through 2030. The state appealed that ruling, but Wednesday’s deal (supposedly) brings an end to the legal squabble.