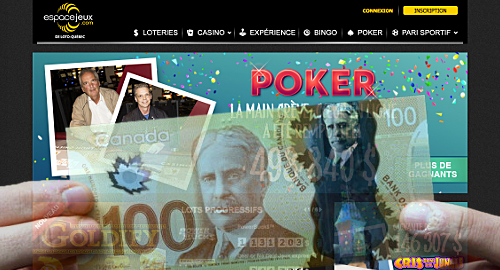 Quebec’s provincial gaming monopoly reported flat profits in its most recent fiscal year despite a nearly 30% boost in its online gambling revenue.

Loto Quebec issued its latest annual report on Friday, detailing the Canadian province’s government-run gambling performance over the 12 months ending March 31, 2017. Total revenue over that span rose 2.1% year-on-year to C$3.64b (US $2.75b), while net income was up a more modest 0.3% to C$1.23b.

The Espace-Jeux online gambling site reported total revenue of C$85.9m, up 29.7% over the previous year and well above Loto Quebec’s target of C$75.4m. Loto-Quebec said the online gains were strong across the casino, lottery and sports betting verticals, with “particularly significant” improvements in mobile gaming activity. Espace-jeux’s registered customer base rose 26% year-on-year.

Loto Quebec says it is proceeding with plans to consolidate its online operations into “a single virtual store” by October 2017, grouping together its online casino, poker, lotteries and the Mise-o-jeu sports betting operations under a single umbrella.

The annual report made no mention of what progress Quebec’s government is making (or not making) on its controversial plan to require local internet service providers to block unauthorized online gambling sites from beaming their signals into Quebec. The federal telecom regulator has issued an opinion that these plans are illegal and telecom groups have filed lawsuits challenging the constitutionality of Quebec’s plan.

Espace-jeux remains a tiny sliver of Loto-Quebec’s overall operations, which is dominated by a lottery business that reported sales up 1.7% to C$1.83b. This category contains the land-based Mise-o-jeu ‘event betting’ parlay wagering business, which saw sales rise 16.5% after the company begrudgingly improved its payout ratio.

QUEBEC GOV’T SENSITIVE OVER VLT SHENANIGANS
Meanwhile, Quebec’s government is fighting a UK company’s efforts to use public data to thwart fraud and other financial crimes. OpenCorporates.com has petitioned Quebec Superior Court to force Quebec to allow access to its public data, as Quebec is the first and only jurisdiction to prevent OpenCorporates – whose work led to last year’s release of the so-called Panama Papers – from using its data in this way.

Last November, Quebec ordered OpenCorporates to “cease all use, including distribution and publication of data” derived from publicly available sources on Quebec companies. OpenCorporates’ filing acidly notes that the order came one month after local media used OpenCorporates’ data to run stories about Loto Quebec’s VLT operators failing to abide by provincial regulations and “the lack of enforcement of these rules by relevant authorities.”

Quebec’s eagerness to hide its lax enforcement standards is a classic example of the perils of having a single entity responsible for both gambling operations and regulatory oversight, as the latter tends to restrict the profits of the former. As an OpenCorporates spokesman told the Canadian Press, “if Quebec wants to claim some sort of leadership role on digital issues and openness, I’m not sure it has that reputation.”