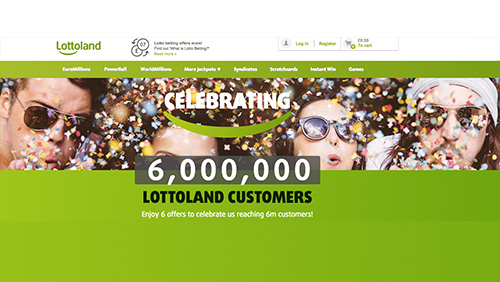 Gibraltar, June 2017  – Online lottery betting operator Lottoland has reached six million customers worldwide, a huge milestone for the company. Launched in 2013, Lottoland has become one of the most disruptive lottery operators in an antiquated market and such a worldwide customer base is testament to an engaging and competitive product.

To celebrate reaching six million customers, Lottoland has announced it will be extending its vast offering of lotteries, with six new and unique offers for its customers on its Powerball, Spinata Grande game, El Gordo de Verano, Instant Millionaire scratchcard, EuroMillions and EuroMillions instant win games.

Through an innovative lottery betting model, Lottoland offers its customers unparalleled choice and value versus traditional lottery companies, and it is this that has paved the way for its success and phenomenal growth. Its unique insurance model, which protects its business against large payouts and gives customers access to the largest lottery jackpots in the world, is light-years ahead of other players. The company enjoyed 820% revenue growth for the period 2012-2015 and its 2016 figures look even better with over 100% year-on-year growth.

Over the past few years, Lottoland has seen customers win big across its wide lottery offering. These have included a £1.2m win on American lottery, Powerball in 2013, and more recent wins of €22m on LOTTO 6aus49 and £4m on Spain’s El Gordo.

The company also claimed its position as the 128th fastest growing company in Europe according to the Financial Times’ FT1000 report. Within its official category (European Travel and Leisure), it also outranked well-known giants such as Spotify, Zalando’s and Just Eat. Lottoland features as the 27th highest-ranking United Kingdom-based organisation and is the only company from Gibraltar.

Celebrating the milestone, Lottoland CEO Nigel Birrell, commented, “We’re delighted that six million customers have experienced our innovative lottery betting product. To reach such a milestone in our first four years is testament to a team of highly ambitious and driven individuals looking to shake up an out-dated market. Our strong growth rates show no sign of slowing and we’re incredibly excited to reach millions more customers worldwide in the coming years.”

Since launching in 2013, Lottoland has grown rapidly to become a world leader in the online lotto betting sector.  Innovation, coupled with the freedom to offer players a unique and enhanced lottery betting experience, has been key to the company’s success.

Lottoland boasts a range of exciting options that set it apart from the competition.  By using an insurance-backed business model, Lottoland can offer features such as DoubleJackpot, allowing players to double their jackpot winnings on any lottery.

Players are able to bet on the outcomes of the biggest lotteries from around the world, with mega jackpots available seven days a week. Major draws available with Lottoland include the EuroMillions, EuroJackpot and America’s PowerBall and MegaMillions lotteries.

The Gibraltar-based business is active in 12 markets, has over 270 employees, more than 5.5 million customers worldwide and achieved revenues in the region of €300m in 2016. Lottoland is licensed and regulated by the Government of Gibraltar, the UK Gambling Commission, the Republic of Ireland National Excise License Office and the Northern Territory’s Racing Commission in Australia.