The 2015 winner, Brian Rast, looks down to see AcTc before raising to 10k. Kevin Hart, calls in posit Hart hits one of his outs to make a straight, and Rast is down to just seven outs. The 7s on the river isn’t one of them and Hart doubles through Rast.

If there was a poker decorum rule book, then this is where the chapter called How to Act When a Player Loses Chunks in a $300,000 Tournament With $6m up Top comes into play.

But there is no book.

Hart does a lap of honour explaining how he is kicking everyone’s ass, and then dry humps the table.

Two levels later and Hart is at it again, this time eliminating the supremely talented Fedor Holz. The German star runs QQ into AA and has the face of a man who has just taken his fancy new girlfriend to meet his Mum, and she has served Shepherd’s Pie for dinner.

Hart flops trip aces, and thanks, Billy, the dealer.

“Yeah, Billy! Get him outta here.”


Now, imagine Salomon Ponte had acted like Kevin Hart – dry humping the table in front of Rast, and asking for the dealer to remove Fedor Holz like he was a bag of rubbish.

How would the poker community have handled that?

There would have been a meltdown.

What’s the difference between Hart and Ponte?

Why is Reputation so Important?


So Much Depends on Your Reputation Guard it With Your Life, is Law #5 in Robert Greene’s 48 Laws of Power.

During my first pass, I hated the book. As I take my second peek, I am beginning to understand the difference between creating more power, and understanding how power works so, you can prevent people stealing yours.

Greene says: your success is destined by your past triumphs.

In the case described above, Hart’s reputation, carefully cultivated, over many years plying his trade in Hollywood, affords him the leeway to behave the way he did.

Hart is a comedian, and that’s what comedians do.

Ponte, on the other hand, has a different reputation, also carefully cultivated, but one that would have sent his opponents, and the viewers, into an outrage, had he behaved like Hart.

It’s important to note that it is not the act that would have upset the masses, nor the intention, it’s the bias associated with the reputation of the perpetrator.

Kevin Hart is in town to make poker fun again.

Our success in life largely depends on the opinion of others. When you consider that none of us ever truly expose who we are, even to the love of our life, then the question remains: how are people judging us?


Greene believes that we judge people based on their outward appearances such as the clothes they wear, the words they utter, and the way they dry hump a poker table.

If this is true, then there is real power here, because you can manipulate your outward appearance – create a reputation – and then defend it with your life. Green argues that if you don’t do this; if you don’t care what people think about you, then your reputation is forged by someone else’s anvil.

Reputation is the cornerstone of power – Robert Greene.

There is not much that we can control in our lives, but we do have control over our actions.

Take control over how the world judges you.

How to Create The Right Reputation

When I first met Marcel Luske, he looked like he was heading to a wedding, decked out in a creme coloured suit, and open-necked white shirt.

I didn’t know anything about Luske at that moment, but I had already begun to establish his reputation, and he hadn’t opened his mouth or done anything of note other than folding his cards.

A day later, I bumped into him at the airport. He was wearing a tracksuit with trainers, carrying his suit in a bag. As we boarded the plane, I said to him, “I thought you had a private jet.”

Turning to me, Luske said, “Young man, nobody in this game has any money.”

I made a tweak to his reputation.

Greene believes that it’s sensible to choose one outstanding quality as the foundation for your reputation. Rather than stand in the corner with all the other plastic bottles, why not be the only glass bottle standing somewhere different?

Luske’s decision to wear a suit and a pair of upside down sunglasses set him apart from everyone else. It gave people like me a reason to talk to him, and this elevated his brand. The Dutchman used his appearance as the foundation of his reputation.

Then, when I spoke to him on the aircraft, his reaction to my suggestion that he owned a private jet, told me something else about his reputation. I could trust him to tell me the truth. He may well have filled my head with nothing but lies ever since, but I believed him to have a solid, truthful reputation after that encounter.

Daniel Negreanu’s reputation is one of fun and honesty.

And reputations aren’t only built on solid values.

But they all have one thing in common. 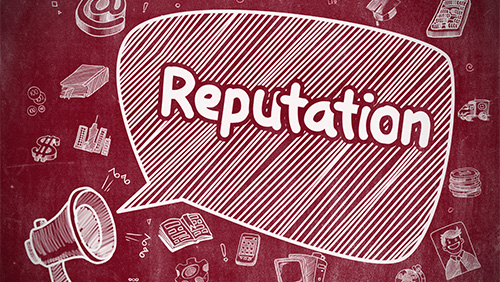 Greene tells a story of how the iconic American showman P.T Barnum once failed to purchase the American Museum in Manhattan after the owners decided to sell to Peale’s Museum.

The sellers told Barnum that Peale had a reputation; Barnum didn’t have one.

Barnum badly wanted the museum but knew it would take years to build a reputation of Peale’s standing, so he decided he would destroy Peale’s reputation.

The ultimate showman succeeded in a series of carefully planned fake news stories straight out of the Donald Trump playbook. Peale’s stock plummeted, and the American Museum reneged on the deal and sold it lock, stock, and two smoking barrels to Barnum.

The same happens in poker.

Unless you are playing 100% on your dime, success or failure in this industry primarily depends on the ability to get your hands on other people’s money as swiftly as possible – not an easy task if you have a poor reputation.

Everyone knows this, and that’s why you see so many stories circulating social media of players not paying back loans. The truth is irrelevant once the seeds are sown, and I believe it’s the holes in a person’s reputational defence that allows these to bloom.

Learn to destroy your enemies by opening holes in their own reputations. Then stand aside and let public opinion hang them – Robert Greene.

Doubt can be as powerful as a Glock pistol in the hands of Rambo.

Even if the accused has the seemingly cast iron defence, layers of suspicion will remain.

And it’s the defence of your reputation that is the problem.

The prevalence of social media has injected reputation with amphetamines. It arms a jury of thousands with pitchforks in seconds. But it also affords the perfect platform for one to defend oneself.

But do this at your ruin.

The pitchforks are placed on the ground.

Why are they defending themselves so much?

Maybe there is some truth to it?

Social media is the perfect place for someone with no reputation to work from to gain ground in the invisible approval ratings by lowering the reputation of someone else in the same field.

Very often, your silence allows the accused to trip up over their insults and jibes. You have to be a strategist when intending to bring down a reputation, and the aggressive in your face method rarely works.

Defending yourself provides them with the bullets. Silence keeps them firing blanks. Rising above social media slander is the only way to defend your reputation. And remember, when you are not talking, and everyone else is talking about you, your reputation grows.

It’s better to be talked about, than nobody knowing that you even exist if the pursuit of power means anything to you.

Be the master of your fate, and also of your reputation – Robert Greene

So many poker players don’t understand Greene’s advice in this area. Feeling outraged by injustice, they leap to their defence with 140-character mortar attacks, only to end up on the edge of a heart attack with their reputation blown to smithereens by a swathe of abuse that began with a single tweeter.

And when that happens there is only one way back.

Close your eyes and think of two people who used to have a strong reputation for honesty and excellence within the poker community whose reputations have been torn apart like the Middle East.

Let me put my reputation on the line and suggest that some of you thought about Chris ‘Jesus’ Ferguson, and Howard Lederer.

Here’s how NOT to rebuild your reputation if you are these two. You DON’T decide to form a tag team and enter the $1,000 Tag Tag event at the World Series of Poker (WSOP).

Greene believes the way to rebuild your reputation is to associate yourself with a paragon of reputational purity and keep your mouth shut. Over time, those unhappy about your alliance start firing questions to the upstanding member of society. If that person has your back, then they will rebuild your reputation through their defence of your actions, or the falsity of the accusations that smashed your reputation to pieces like an air conditioning unit stuck on cold in an angry Eskimo’s igloo.

It’s not just people who use this technique.

PokerStars used the play recently when they hired Kevin Hart.

The man dry hump poker tables, and we are laughing so hard we don’t notice the glue setting on PokerStars brand spanking new reputation.