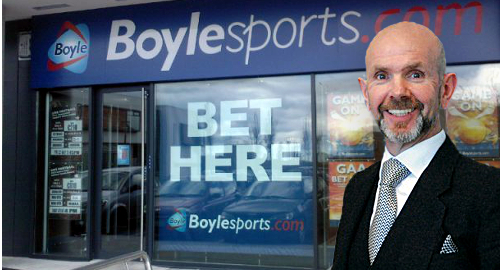 The founder of Irish bookmaker Boylesports plans to step down as CEO and name a replacement from within the family-owned business.

On Sunday, the Independent reported that Boylesports founder and CEO John Boyle intends to resign his chief executive role later this year and transition to a new role as chairman of the company. The 61-year-old Boyle, who has been CEO since 2012, said he was “ready to step back from the frontline.”

Boyle, who founded his company in 1982 by opening a betting shop in County Armagh, said he’d enjoyed handling the CEO’s responsibilities for the last five years but confessed that it’s “not my gig. My gig was retail and going out and finding stores.”

On that front, he’s been more than successful, having expanded the company’s Irish retail footprint by more than 10% in the previous six months, pushing Boylesports’ total Irish retail business to 231 shops.

Most of the additions have been the result of smaller independent bookies approaching Boyle’s company about selling out. Boyle said he wasn’t sure whether these indies were “tired of the business or whether there’s that much change with technology – but we’re getting a lot more calls.”

Boylesports had hoped to make a significantly larger expansion in the UK by acquiring the 360 betting shops that bookmakers Ladbrokes and Coral were required to sell to win regulatory approval of their merger. While Boylesports were tipped as likely lads to win the auction, that honor ultimately went to UK rivals Betfred and Stan James.

Boyle hasn’t given up on making an acquisitive splash in the UK retail market, and Boylesports is reportedly “very close” to a deal with an unidentified company. Boyle has been doing due diligence with the company over the past month, and he hoped that Boylesports would be operating “at least 100 shops in the UK” within the next 12 months. Boyle is also open to the prospect of acquiring an online-only business, provided it was “the right fit.”

As for who will be leading Boylesports in 12 months’ time, Boyle suggested it would likely be someone from within the family-owned business, although not necessarily a family member. There are a number of 20-something relatives working in the company but Boyle said the job required a level of “maturity” that probably doesn’t come until a staffer passes the age of 40.

Boyle also addressed the subject of whether the privately held Boylesports would consider a public float. Boyle said going public wouldn’t be his preferred option, but future decisions on that front could be made by other members of his family.

Boyle said the company is debt-free and betting turnover is well above £1b per year. Boyle said it was always his goal to top that £1b benchmark and suggested “I’m closer to doubling that” and “our next goal is £10b. That’s the plan we’re on.”