Warriors tip off as favorites against Cavaliers in 2017 NBA finals

The 2017 NBA Finals tip off this Thursday with Game 1 in Oakland, a familiar site for the annual championship series as the favored Golden State Warriors have home-court advantage against the underdog Cleveland Cavaliers for the third consecutive year. 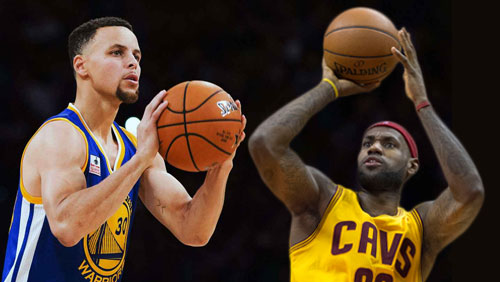 The big difference this time around obviously is that the Cavs are the defending champs, with the Warriors countering their title by adding Kevin Durant last offseason. Golden State beat Cleveland in six games two years ago for the title, although the Cavs lost point guard Kyrie Irving at the end of Game 1 and did not get much from anyone but LeBron James the rest of the way.

The Warriors followed that up by setting the league’s regular-season win record with a 73-9 mark but ultimately falling short of repeating.

Fast forward to 2017, and these teams have combined to lose only once this entire postseason. Cleveland blew a 21-point lead in a shocking Game 3 home loss to the Boston Celtics as a 16-point favorite in the Eastern Conference Finals but has otherwise been perfect.

Golden State is 12-0 straight up in the playoffs and 8-4 against the spread, taking advantage of a San Antonio Spurs team playing without their best player Kawhi Leonard in the Western Conference Finals. Regardless, the Cavs and Warriors are clearly the two best teams in their respective conferences and will duke it out here.

Golden State is listed as a 7-point favorite for Game 1 and covered the spread as 6-point chalk in each of the previous Game 1s versus Cleveland in the NBA Finals. The Warriors have had more rest than the Cavs, last playing back on May 22. However, they are also still playing without head coach Steve Kerr, who remains out after undergoing a procedure to repair a spinal fluid leak due to complications from back surgery.

Assistant Mike Brown has been leading Golden State in Kerr’s absence and will be facing his former player in James, as the two were together in Cleveland between 2005 and 2010. Brown later returned to coach the Cavs during the 2013-14 season when James was still with the Miami Heat.

James is playing in a record seventh straight NBA Finals and owns a 3-4 mark in his previous seven appearances overall.