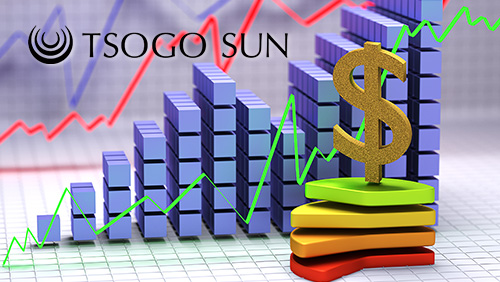 For the fiscal year ending March 31, Tsogo Sun announced that its earnings before interest, tax, depreciation, amortization (EBITDA) grew to R5 billion (US$380.81 million) while revenue for the gaming division rose 3% to R9.1 billion ($704.53 million), with gaming win growth disappointing at 2%.

Adjusted headline earnings per share for the year rose 6% to 207.6 cents against 196.5 cents in the prior year, according to Africa’s biggest hotels and gambling operator

“This performance was largely due to the group’s M&A activity,” Tsogo Sun said in a statement, according to MoneyWeb.

Tsogo Sun said that its REIT venture will create value for its hotel business and access new properties while allowing them to compete better with property rivals.

It also acquired two hotel businesses from the Liberty Group in KwaZulu-Natal and a 20% share in the Grandwest and Worcester casinos in the Western Cape.

The non-gaming segment of Tsogo Sun posted mixed results, with revenues of its hotel division surging 28 percent to R3.5 billion ($270.97 million). The offshore division of hotels, on the other hand, was down 8 percent to R635 million ($49.16 million).

Looking ahead, Tsogo Sun chief executive Marcel von Aulock warned that the company’s revenues will remain under pressure this year due to South Africa’s weak economy.

The casino business suffered last April after South African Finance Minister Pravin Gordhan was ousted in a cabinet reshuffle at the end of March.

The firing of Gordhan, according to von Aulock, created a negative ripple throughout the South African economy, with bond yields rising while the South African Rand continues to slide. Consumer confidence was also greatly affected by Gordhan’s exit.

“With a weak economy in South Africa and many of the commodity focused countries in which we operate, trading is expected to remain under pressure,” von Aulock said.