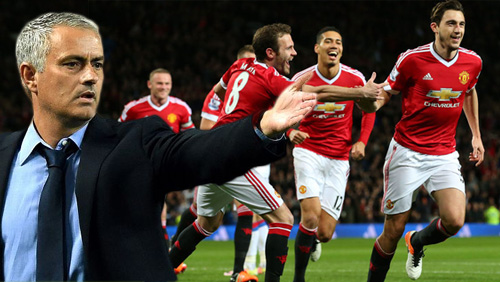 As Manchester United qualify for the Champions League with a victory over Ajax in the Europa League Final Lee Davy wants to know Jose Mourinho’s side is entertaining?


There was a time when my life stopped for football. A Manchester United fan since birth, it was the closest thing I had to religion – Sir Alex Ferguson was my God.

And yet, last night, as my beloved Red Devils lined up to face Ajax in the Europa League Final I was busy watching Seth Godin marketing videos.

But there is another reason I prefer to watch the highlights than sit through 90-minutes of football – it’s boring. The cynics could argue that I am an armchair fan spoiled by the excess of rampaging football that brought United unprecedented success in the Premier League, I get that.

But it’s not that.

In the modern era, football clubs are big business, and as a fan, I am a customer. The sole purpose of a business is to make money, and the smart ones do this by identifying what customers value and providing it.

The question of value has changed for me over the years. In the beginning, when I was a child, the value Manchester United created for me was tribalism. I needed a way to fit in and pretending to be Bryan Robson in the school playground helped.

Today, I value entertainment over winning. I am happy that Manchester United beat Ajax in Stockholm to add the English giants to the might of Ajax, Chelsea, Juventus, and Bayern Munich as the only five clubs to win all the major European competitions – but it’s not what I value.

The Dichotomy of Jose Mourinho

Jose Mourinho‘s first season with United will go down as a success – delivering the Community Shield, English Football League (EFL) trophy, and now the Europa League. I also believe the man will bring United long term success in the Premier League.

But at what price?

There is a strict professionalism about his teams that is not cut out of the same steel that a Ferguson side was. Under the Knight, United moved forward with pace and power, but they had the bite and worked harder than anyone. And yet you will always remember them for their flair, and not their grit.

These days, United prefer to be hard to beat than to be good looking. They don’t stare into the mirror making sure every strand of hair is immaculately locked in place. They don’t care. For Mourinho, it’s all about winning, irrespective of panache.

United is one of the biggest clubs in the world. They have a season ticket waiting list longer than the population of the Netherlands, and it’s for this reason that nothing will change.

United don’t have to change.

The masses will keep following.

Like me, in a previous life, it’s the closest thing that some people have to a religion.

They will not abandon their God, whether he is Scottish or Portuguese.

A dour-faced Mourinho has been complaining for weeks about the number of games his United stars have had to play this season. All told they featured in 64 games, eight more than Ajax.

At the end of the match, there were more crutches on the pitch than players showing the impact those games have had on United’s players. But that didn’t stop Mourinho leaving Wayne Rooney on the bench every week.

United’s record goalscorer did make it onto the pitch for the final few minutes if nothing else to save him the ignominy of lifting the trophy wearing a fluorescent reserve bib. It was his fourth appearance in a major European final, equalling Ryan Giggs record.

By the time Rooney played what is almost certainly his last game for the club United had sewn up the tie with a deflected shot from Paul Pogba, and the sixth goal in eleven Europa League ties from Henry Mkhitaryan.

The game was that easy; United could have played with the crutches. Ajax, who fielded the youngest-ever side to feature in a European final, couldn’t find the ingenuity to break down United’s defensive wall that begun at the top with Marcus Rashford buzzing around the defence like an annoying bluebottle during a picnic.

It is the fourth European title for Mourinho, and it means United will feature in the Champions League next season. I wonder if the miserable one will complain about a fixture pile-up competing in the echelon of European football?

I won’t be watching it.

Because as we learned this week, with children of Manchester being blown to pieces by some madman in the MEN Arena, there is more to life than watching eleven players ordered not to lose.