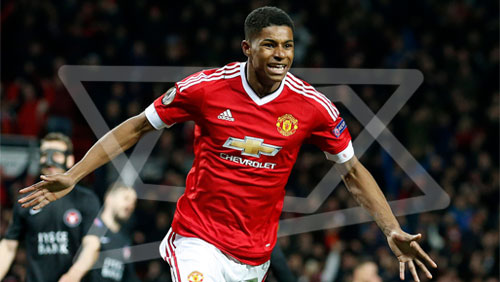 Manchester United are still on course to qualify for the Champions League via the Europa League after a Marcus Rashford free kick registered a crucial away goal in their two-legged squabble with Celta Vigo.

Despite Jose Mourinho’s lack of interest in the Europa League, the bookies have made them favourites from the moment they kicked a ball. Today, Mourinho is very interested in this competition, and they remain the bookie’s favourites after a comfortable one-nil win in Spain.

Bodog had United pegged at the +115 favourite to return from Celta Vigo with a win tucked underneath their shorts. The brilliant Marcus Rashford made sure of that, just as he did against Anderlecht in the quarter-finals.

The teenager scored a brilliant free kick in the 67th minute to take them into their second leg at Old Trafford on Thursday in a position of strength.

We shouldn’t be surprised at the result. Celta Vigo appeared in their first-ever European semi-final. They may have beaten both Barcelona and Real Madrid this season, but they lie 11th in La Liga losing 15 times in the previous six months. United, in contrast, has lost only two in the same period.

Paul Pogba returned to the side after injury and looked in inspired form. Eric Bailly also shrugged off his injury concerns to remain in the backline. And Marouane Fellaini returned to the team after his sending off against Man City.

Back to the game in hand, and despite United’s dominance, it was Celta Vigo who should have taken the early lead when Daniel Wass headed wide from seven yards when it looked easier to score.

Marcus Rashford was next to register in the chances bracket when he fired in a right-footed curler only for Alvarez to save brilliantly. Jesse Lingard then spurned two great chances, both from deep inside the penalty area. Then the former Liverpool player Lago Aspas should have done better when the ball cannoned off his shoulder and went wide to spurn another great chance for the Spaniards.

Pione Sisto produced an excellent save from Sergio Romero after his goal-bound effort spun awkwardly towards the United net after taking a deflection, but the Argentine who has been in sparkling form in this competition tipped it over the bar.

And then up stepped Rashford.

Speedy Gonzalez broke through a gap in the backline, and the only defence was to bring him down. Rashford and Blind stood on the free kick, the Dutchman was the decoy, and the young Mancunian showed the world that he could run, dribble, score goals, and also take a mean free-kick.

It’s worth noting that the United team and the backroom staff believe in Rashford to such a high degree that he took the free kick and not the world’s most expensive player, Paul Pogba.

All United need to do now is draw at Old Trafford on Thursday, and they will be featuring in the final of a competition they have never won. It can’t be that hard, they have already drawn 14 times in the league this season.

The final is in Stockholm on 24 May, and if United do make it, they will surely play Ajax who defeated Lyon by 4-1 the night before.