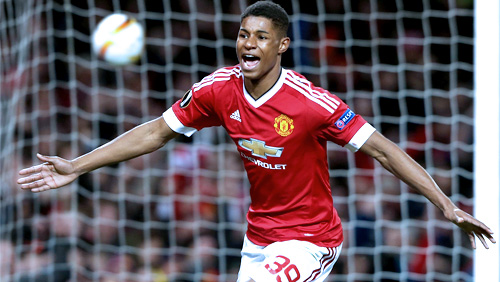 England manager, Roy Hodgson, has sprung a surprise by naming Manchester United’s 18-year old forward, Marcus Rashford, in his 26-man provisional squad for the European Championships in France this summer.

Roy Hodgson has pulled a very young rabbit out his Euro 2016 hat. Let’s hope he doesn’t get dazzled by the headlights.

The England manager has decided that Manchester United’s 18-year old forward, Marcus Rashford, has done enough with his seven goals in 16 appearances to warrant an inclusion in a provisional squad of 26 players.

Rashford burst onto the scene in the latter half of the season after key injuries to Anthony Martial and Wayne Rooney left United woefully short of firepower. The young lad from Wythenshaw repaid Louis Van Gaal’s faith in him by scoring two goals on his debut in a 5-1 Europa League victory over Midtyjlland making him the youngest United player to ever score in Europe. His partnership with Jesse Lingard and Martial has been one of United’s slim highlights this season.

He has represented his country at Under 16, 18, and 20 levels. He hasn’t even featured in the Under 21’s let alone start for the full national side. United coach Ryan Giggs has said it’s too early for Rashford. Roy Hodgson played down those comments during his press conference stating, ‘What Ryan Giggs says publicly and privately may be different.’

Rashford isn’t the only shock inclusion. Newcastle winger Andros Townsend makes the cut after a strong finish to the season scoring a few cracking goals along the way. Townsend has always done a job for Hodgson and he is a big fan. The former Spurs winger has made 10 appearance for his country scoring three goals.

One of the reasons Hodgson decided to go for 26 players, and then cut it down by three, is the late return to fitness of Arsenal’s Jack Wilshere and Liverpool’s Jordan Henderson. Wilshere broke his leg in August and only returned to the full starting lineup in the 4-0 drubbing of Aston Villa on the last day of the season. Henderson hit the sidelines in April with knee ligament damage but has also recently returned to the fold.

There is no place in the 26 for Arsenal’s Theo Walcott. Rashford’s inclusion ahead of the speedster shows how far down the pecking order Walcott has fallen. I feel strongly that Walcott needs to leave Arsenal quickly if he is ever going to resurrect a career that promised so much when he was so young.

The Everton captain Phil Jagielka also misses out. I think this one is a mistake with only Chris Smalling, Gary Cahill, and John Stones capable of playing in the middle.

Mark Noble predictably misses out, the arial power of Andy Carroll is not needed, and the resurgence in form from Jermain Defoe does not see him join a very powerful selection of forwards. I think Hodgson’s decision to look ahead, rather than behind, is an excellent one.

Hodgson has piled the pressure on himself by choosing a provisional squad. He has until 31 May to cut that down to 23, and that means the friendly against Australia on 27 May will be the last chance for those on the fringe to impress.

England has three warm up games before they face Russia in the first game on Sat 11 June. They will play Turkey on 22 May, Australia on 27 May, and finish with a game against Portugal on 2 June.

Here is the provisional squad?