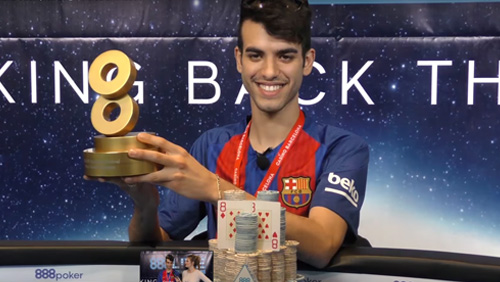 Luigi Shehadeh & Catalin Pop take the top prizes in the €1,100 Main Event and €2,200 High Roller in an exceptional 888Live event in the Casino Barcelona.

With PokerStars and partypoker currently butting heads on the live tournament scene, it’s easy to forget that the second largest online poker room this side of my bag of carrot batons are also making significant headway in the live arena.

888Poker has vowed to take back the game, and they are not content with focusing on online poker. The team understands that the two formats are symbiotic, and with 888Local Live and now 888Live we see some outstanding progress.

It was a bold move to slap a €500,000 guarantee on their €1,100 buy-in Main Event at the Casino Barcelona, but it turned out to be an inspired decision. 609 entrants waltzed past the thongs and bare chested ladies on the beach to take a seat in 888’s most ambitious live event to date, and it was a marked success.

888 pulled out all the stops for this one when it came to amassing the right faces. 888Poker ambassadors Kara Scott, Sofia Lovgren, Dominik Nitsche, Natalie Hof, Bruno Kawauti, Nicolau Villa-Lobos, and Bruno Foster were all in attendance. None of them made a bean in the Main Event, but Nitsche finished ninth in the €2,200 buy-in High Roller to double his money ahead of his appearance in the $300,000 Super High Roller Bowl next week.

Joining the ambassadorial team was Michael ‘The Grinder’ Mizrachi, Patrik Antonius, Cate Hall, William Kassouf, and Stacy Matuson. Matuson cashed in 55th place in the Main Event, Kassouf bubbled the final table, and Hall wound up finishing higher than everyone with a fourth place berth.

The tournament stockpiled €584,640 in cyber bills, and a 23-year old online hot shot from Italy took down the €115,000 first prize. Luigi Shehadeh came into the event off the back of a career-best €100,000 score, beating 2,477 entrants in the €200 buy-in Barracudas Main Event in Casino Campione D’Italia, and he maintained his run good to beat local lad Carlos Garcia Rodriguez in a short heads-up match.

The final table featured two Scots, a Spaniard, a Swede, a German, a Russian, a Dane, a Swiss player, and Catalin Pop from Romania. As he is the only actor, I have named you can rightly assume that he won the thing.

Pop defeated Main Event Travel (MET) owner Fraser MacIntyre in heads-up action to take the €40,000 first prize. Pop is a fan of beating up the Scots. In early February he won the 888Live Main Event in Rozvadov beating Niall Farrell (3rd) and Ludovic Geilich (4th) in the process.

And now for a few laughs.