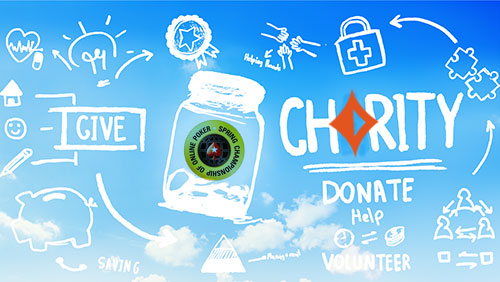 Poker continues to make a difference after the PokerStars Spring Championship of Poker, and partypoker Powerfest High Rollers agree to donate considerable sums to charity.


Playing poker is great fun, but add a deep, meaningful purpose into the equation, and it becomes divine.

There was a time when the likes of Doyle Brunson would turn up for a game of poker with a pistol hidden from view just in case there was any trouble. These days, the game earns more money for charity than any other game on the planet and is right up there with the top sports in the world.

On Tuesday 16 May at 7 pm (GMT), partypoker will host their largest-ever online buy-in event. The online poker room added a $25,500 buy-in Powerfest High Roller after receiving feedback from the players, and today, they promised to donate all the registration fees to a charity of the winner’s choosing.

The event carries a $2m Guarantee meaning they need 80 entrants to prevent them from putting their hand into their pocket. If this happens, the winner can donate $40,000 to his or her favourite charity.

If the tournament gathers enough momentum to hit the 100 entrant mark, then partypoker has promised to give a further $50,000 meaning one lucky charity could end up with $50,000 for a night’s work.

15 people have already registered for the event including Dusk till Dawn (DTD) owner Rob Yong, and partypoker ambassadors Sam Trickett and Patrick Leonard. 20 people have qualified via the online satellite route, and that option remains open as I type.

“We will pray to the poker gods that this comes off and becomes a feature of our online festivals,” Tom Waters, Managing Director, partypoker, stated in a press release.

SCOOP Raises a Six-Figure Sum For Raising For Effective Giving

Moving from one $25k buy-in with a $2m guaranteed event looking to fatten the piggy bank of a charity to another.

The PokerStars Spring Championship of Online Poker (SCOOP) $25,000 No-Limit Hold’em 8-Max High Roller attracted 61 unique players and 32 re-entries, proving how much of a challenge it will be for partypoker to hit the century.

The winner of the event and $702,658.75 was BIack88 from Russia who defeated fish2013 from Belarus in heads-up action after the pair had sat down and worked out a deal over a brew and some Jaffa cakes.

The event created a $3,065,625 prize pool and as promised PokerStars donated $109,375 to Raising for Effective Giving (REG). It’s been a very successful festival for the effective altruists after players jumped on the #SCOOP4Charity bandwagon to donate 3% of all final table winnings, including Martin Jacobson who won his first ever SCOOP title and $106,984.38. The Swede had promised to give 5% of all profits to REG, as he did when he won $10m back in 2014.