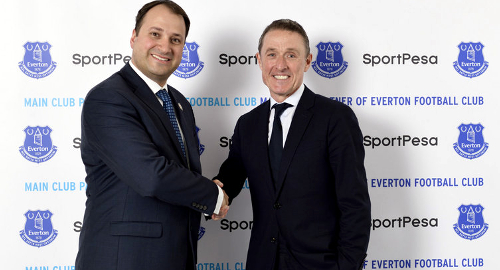 On Monday, SportPesa confirmed rumors that have swirled for months regarding the company’s tie-up with Everton. The club’s new kit, which will be unveiled on Tuesday, will feature SportPesa’s brand on its front as of June 1.

Terms of the five-year deal weren’t disclosed, but the club called it the “biggest commercial partnership” in its 140-year history. In January, Everton CEO Robert Elstone told investors that the new shirt deal represented a “threefold” rise over the club’s previous deal with Thai brewery Chang, which was worth £16m over three years, suggesting SportPesa could be paying up to £9.6m per year.

Elstone hailed SportPesa as “an ambitious and growing global company” that is “committed to significant investment not only into Everton through this partnership but also in the city.” SportPesa recently announced plans to shift its European HQ to Liverpool, a move that is expected to create around 100 local jobs.

SportPesa has previously inked a number of tie-ups with UK football clubs, including Southampton, Arsenal and Hill City. The company’s UK marketing manager, Shaun Simmons, praised Everton for doing “a fantastic job of making Everton accessible for its fans, and we look forward to amplifying this globally.”

On Monday, AllAfrica.com reported that the Parliamentary Budget Office (PBO) had made a presentation to the Finance Committee, calling for for a “slight reduction” in the proposed tax. The PBO warned that the proposed tax hike was overly “punitive” and was unlikely to achieve the government’s dual aim of raising extra revenue while reducing the potential harms of gambling activity.

The tax plan has met with pushback from betting operators – including SportPesa, which has mounted a legal challenge of the plan – as well as local sports teams and leagues, who fear that suddenly cost-conscious firms will scrap their sponsorship deals.