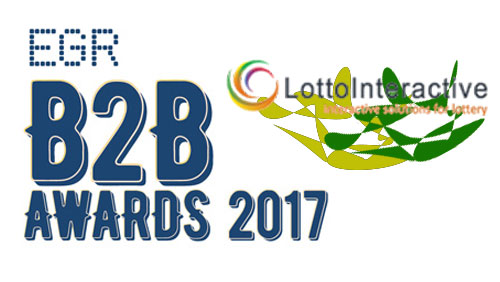 LOS ANGELES, CA — (May 2017) – LottoInteractive, a leading developer of skill-based instant win games for lotteries and iGaming operators, has been shortlisted in two categories at the EGR B2B Awards, highlighting the company’s excellent product performance over the past year. LottoInteractive is a finalist in the Mobile Gaming Software and Skill Games Supplier categories at the Awards, which recognize commercial success, innovation and superior user experience.

In the past year LottoInteractive’s inaugural launch was the highest ranked game by players and the most wagered game in Georgia. The company turned its focus to European distribution, securing new commercial deals and highly anticipated product launches this July.

“It’s an honor to be recognized and nominated for these prestigious awards alongside the industry’s leading companies”, states Brian Ward, CEO of LottoInteractive.

“There are many great companies nominated for awards in this highly competitive space, so to be included validates our efforts and our approach that it should be as much fun to play these games as it is to win.”

Winners of the EGR B2B Awards will be announced at a ceremony to be held on the evening of June 6, 2017 at The Hurlingham Club, London, UK.

About LottoInteractive
LottoInteractive creates immersive skill-based mobile games in the most popular game genres integrated with instant-win mechanics — a first-of-its-kind crossover experience. LottoInteractive is committed to creating game experiences that will bring operators and lotteries new players who want to be entertained and play on-the-go, while giving loyal existing players exciting interactive options—all with a chance to win cash with every play.