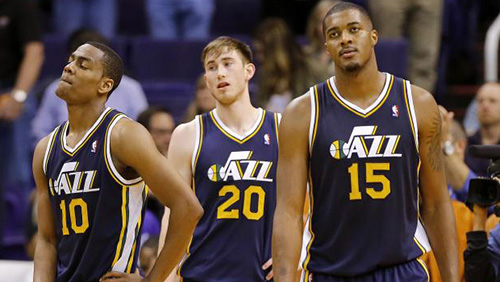 Two of the three Game 6s scheduled for Friday will see the road teams attempting to close out their opponents while another will get that opportunity at home.

The fifth-seeded Utah Jazz have taken advantage of the absence of Blake Griffin for the fourth-seeded Los Angeles Clippers to seize a 3-2 series lead, and they are listed as six-point home favorites to advance. The top-seeded Golden State Warriors await the winner.

Utah is coming off a 96-92 win at Los Angeles in Game 5 on Tuesday, pulling off the upset as a three-point road underdog. Gordon Hayward led the Jazz with 27 points, as his team won the battle in the paint with Griffin out, outscoring them 34-28 there and out rebounding them by a 43-34 margin.

Los Angeles has lost consecutive games to Utah for the first time since 2012 after going 20-3 straight up in the previous 23 meetings before losing the past two. The Jazz are 5-2 against the spread in the last seven.

The other two Game 6s both take place in the Eastern Conference, starting with the fourth-seeded Washington Wizards visiting the fifth-seeded Atlanta Hawks as three-point road underdogs. The Wizards won Game 5 on Wednesday 103-99 at home but failed to cover the spread for the third straight time in the series.

The Hawks covered as 6.5-point road dogs, and they won Games 3 and 4 at home by an average of 14 points.

Washington’s last victory at Atlanta took place back on January 27, with all five starters scoring in double figures en route to a 112-86 rout as a three-point road dog. The Hawks shot just 36.1 percent from the field in that matchup (30-of-83), but they have made better than 44 percent of their attempts in both games at home in this series.

The top-seeded Boston Celtics will also get a chance to move on when they visit the eighth-seeded Chicago Bulls as 1.5-point road favorites. Boston has won three straight SU and ATS since Chicago point guard Rajon Rondo went down with a fractured thumb, although he has been practicing and hopes to return for Game 6.

The Celtics have dominated the Bulls lately despite point guard Isaiah Thomas struggling with his outside shooting. Thomas has been brilliant in taking the ball to the basket against Chicago, but he has made just 2-of-19 shots from beyond the three-point arc in the past two games combined.

On the positive side, Thomas has also made 23-of-24 attempts from the free-throw line during that same stretch in averaging 28.5 points.