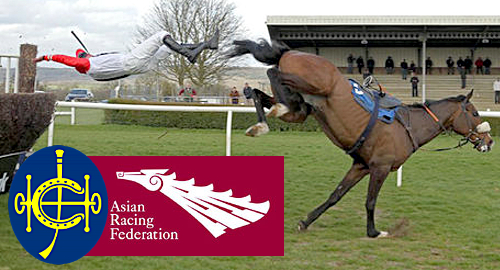 On Friday, the Asian Racing Federation (ARF) announced that it had inked a memorandum of understanding with the Australian Criminal Intelligence Commission (ACIC) to combat international betting operators who dare to compete with the racing monopolies in ARF member nations.

The ARF, whose 21 members include the Hong Kong Jockey Club (HKJC), also announced the launch of its Anti-Illegal Betting Task Force (AIBTF), something the ARF has been pushing for since HKJC CEO Winfried Engelbrecht-Bresges proposed its formation at the 36th Asian Racing Conference in January 2016.

Tellingly, the HKJCs head of security Martin Purbrick has been appointed chair of the AIBTF, which plans to share information between members and with governments and law enforcement agencies to uphold “the integrity of the sport.” And hey, if this helps uphold the integrity of the HKJC’s bottom line, all the better.

Despite routinely posting annual turnover and revenue gains, the HKJC has long railed against internationally licensed online betting operators who are able to offer punters a wider variety of race betting options, often at more favorable prices. The HKJC’s traditional line of attack against these sites is that they’re connected with organized crime and thus guilty of “blood crimes.”

Purbrick told the South China Morning Post that one of the AIBTF’s responsibilities was to help educate ARF members on the mechanics of race-fixing and how to boost efforts aimed at preserving race integrity.

However, Purbrick revealed that the AIBTF’s main focus was combatting competition. The AIBTF plans to produce reports on illegal betting in each ARF member’s home markets, including “information about individual groups,” and would help educate ARF members on how to pressure their local governments into “doing something to solve these problems.”