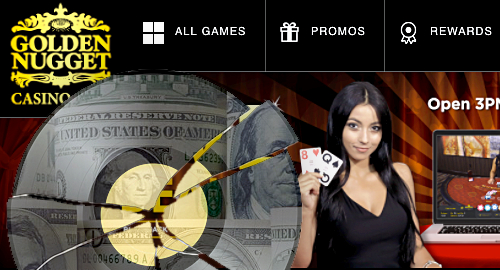 Figures released Wednesday by the New Jersey Division of Gaming Enforcement (DGE) show the state’s licensed online gambling operators generated revenue of $21.7m in March. The figure is 40.2% higher than the same month last year and nearly $3m higher than the previous monthly high of $18.8m set this January.

The online March madness was entirely driven by the casino vertical, which shot up a whopping 49.4% year-on-year to just under $19.5m, while online poker, which until recently had been showing signs of life, fell 8.5% to $2.25m, although that sum is nearly $100k higher than NJ-licensed poker sites earned in February.

The Golden Nugget’s casino-only site continued its recent streak atop the revenue charts with a staggering $6.17m, a full million more than the Nugget’s February total, and yet another new record for a state-licensed operator. The Nugget has now ranked first in revenue generation in six of the last seven months.

The Borgata family of sites maintained its runner-up position with $4.35m in March. The casino vertical drove most of the Borgata’s gains ($3.7m) although its poker revenue inched up slightly to $650k.

Roaring into third place was Resorts Digital Gaming, which also had its best ever month with $4.2m. Resorts’ casino vertical reported just under $3.3m while its poker business – which includes Amaya Gaming’s PokerStars NJ brand – came in just under $909k.

The Tropicana’s casino-only site brought in $3.86m, thereby relegating Caesars Interactive Entertainment New Jersey to the position of cellar-dweller with $3.15m, all but $693 of which came from the casino vertical.

BETFAIR GETS BEHIND LIVE BETTING
The Golden Nugget was the first state-licensed operator to launch a live dealer casino product, but Betfair US – which operates under the Nugget’s casino license – has plans to join in the fun, albeit from a digital distance.

Bet Behind allows surplus players to place side bets on the action of the players lucky enough to have secured seats at the Nugget’s live blackjack tables. However, these behind bettors are passive observers to the action, and are subject to the decisions of the players actually seated at the virtual tables. However, Bet Behind players can select which actual bettor on whose action they wish to piggyback, so best study their form before choosing your nag.