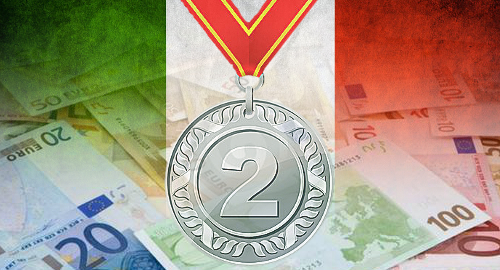 Italy’s online gambling market is the second largest in Europe thanks to a 25% rise in operator revenue last year.

Figures released this week by the Milan Polytechnic University show Italy’s regulated online gambling market revenue totaled €1.026b in 2016, a full one-quarter higher than 2015’s total. The University believes this makes the Italian market second only to the UK in terms of revenue generation, with France in third place and Spain ranking fourth.

The casino vertical captured the bulk of online revenue at €439m, up one-third year-on-year. Sports betting wasn’t far back at €350m (+31%), while poker ranked third with €133m (-10%). All other products, including bingo, lotteries, virtual betting, exchange betting and horseracing, accounted for the remaining €97m or so in 2016’s total.

The average Italian online gambler is a male between the ages of 25-34 years old, although the ranks of females gambling online rose two points to 17% last year. The average gambler holds 2.14 online accounts while average spending per active player rose 7% to €111. The number of Italians who made at least one online bet last year was 1.79m, up 15% from 2015.

Mobile gambling accounted for nearly 23% of 2016’s total, up from 19.2% in 2015. Sports betting was the most mobile-friendly vertical, with 56% of wagering done with a handheld device compared to 29% for casino.

The government’s tax take from online gambling was €247m in 2016, up more than one-fifth from 2015. If local media are to be believed, Italy’s gamblers are in for a bit of a shock, as the government is preparing to hike taxes on gambling winnings above €500 from the current rate of 6% to 10%. Lottery winnings of all sizes will see the tax bite rise from 6% to 8%.

LIGHT AT THE END OF POKER TUNNEL?
Poker’s 2016 decline was primarily due to a 15% fall in cash game stakes, as tournament spending was down a more modest 1.5%. Cash games reported a 7% decline in active players, while tournament numbers were up 2%.

Hard to believe, but poker was Italy’s dominant vertical as recently as 2012, accounting for over half of all online revenue. The government hopes to give poker a boost from the long-delayed dream of sharing online poker liquidity with other European regulated markets, including France, Spain and Portugal.

Agimeg.it quoted Daria Petralia, head of Italy’s gaming regulatory body, saying the international liquidity formalities would likely be done “by the summer … but then we would need at least another six months” before any cross-border poker actually got underway. With any luck, there will still be some Italian poker players left by then.