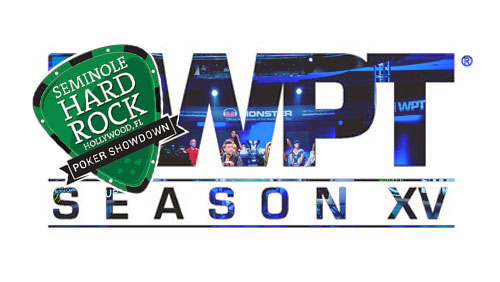 The World Poker Tour has brought down the curtain on another highly successful season at the Seminole Hard Rock Poker Showdown by crowning the Tournament of Champions and adding two more champions to the Champions Club.

If you want brand recognition in the claustrophobic poker industry, don’t sit in front of a whiteboard outlining a battle plan to defeat the competition. It’s not about beating the competition. It’s about continually redefining customer value; understanding human desire, and putting on a show that makes sure the customer feels that you know them.

The World Poker Tour (WPT) has been playing this game for over a decade and a half, and it’s the reason in a recent survey conducted on the Hendon Mob that 35.6% of those polled said they perceived the brand very well, and 24.8% perceived it well. The team understands value, and deliver season after season.

After 18 festivals of poker from Canada to California, the WPT wound up a show-stopping Season XV with a poker finale jam-packed with value from the Seminole Hard Rock Hotel & Casino in Hollywood, Florida. It was time to crown a Season XV Champion of Champions, but there were a few more tournaments to whet the appetite along the way.

It’s been quite a 12-months for Jason Mercier.

The PokerStars Team Pro came out of the 2016 World Series of Poker (WSOP) with the Player of the Year (POY) award, tied the knot with Natasha Barbour and is set to become a Dad. And all of this love juice seems to be seeping into his poker game.

Mercier topped a healthy field of 116 entrants in the $25,500 No-Limit Hold’em High Roller. The man who is a WPT Main Event title way from joining the Triple Crown club bested a final table including Loni Harwood, Olivier Busquet, and the current Global Poker Index (GPI) Player of the Year leader Bryn Kenney.

Making it to the heads-up phase was another man who has had an outstanding past 12-months. Mercier squared off against the formidable foe of Justin Bonomo with a 6.4m v 5.2m chip advantage and finished him off to take the $794,600 first prize.

Here are the top nine payouts

The event attracted 1,207 entrants, making the $2m guaranteed prize pool look a floppy bunny ear with over $3.8m going into the kitty. It was the largest win of Sinishtaj’s career, besting the $107,147 he accrued for finishing runner-up to the former WSOP Main Event Champion, Joe McKeehen, in a World Series of Poker Circuit (WSOPC) Main Event in Atlantic City back in 2013.

Sinishtaj defeated Darryll Fish in heads-up action. Fish has been grinding the live tournament circuit for many years but has seen his voyages into the deep end of tournaments increase in recent times.

Sinishtaj booked a seat in the WPT Tournament of Champions after winning the event.

Here are the top nine payouts:

Ryan Riess has acceded to the WPT Champions Club.

The former WSOP Main Event Champion and self-proclaimed best player in the world topped a field of 349 entrants to win the $10,000 WPT Seminole Hard Rock Finale.

The in-form Jason Koon and Cliff Josephy also made the final table. Riess’s victory edges him over the $10m live tournament earnings marker and means he is a PokerStars Championship title away from the Triple Crown. He also earned a seat in the WPT Tournament of Champions.

Here are the top nine payouts

When Tony Sinishtaj and Ryan Riess took their seats in the Tournament of Champions the field was 66 strong, two more than last year, when the amateur, Farid Yachou, shocked the world by coming out on top.

And Michael ‘The Grinder’ Mizrachi made the final table for the second successive year, despite telling me over a year ago that it wasn’t a smart move to compete in an event where only the very best sat down the play. The Grinder finished third last year, and this year he went one better ending the night as runner-up for a $218,000 score.

And the final table also housed the legendary Erik Seidel. Now he would have been the perfect Champion of Champions, but the New Yorker had to settle for fifth place.

In the end, the man of the moment was the winner of the WPT Borgata Winter Poker Open in Atlantic City, Daniel Weinman. The Atlanta native took his all-time earnings over the $2.6m mark by snagging the $381,500 first prize and all the trappings.

And there were a lot of trappings.

In addition to the cash, Weinman picked up a brand spanking new Audi S5 Coupe, a pair of gold headphones from Monster, a watch bigger than a Grandfather clock from Hublot, a customised poker table from BBO Poker Tables, a seat in Tiger Woods charity poker game, a Monster Ravebox, a pair of Maui Jim shades, and a one-week stay at a Wyndham Extra hotel of his choice.

Here are the final results of the Season XV extravaganza.