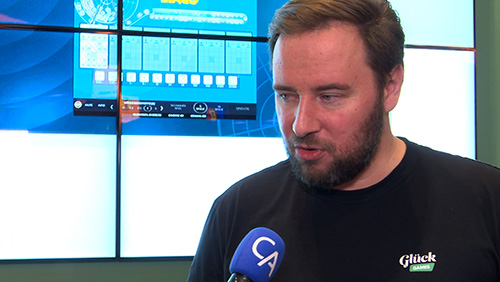 In this interview with CalvinAyre.com’s Becky Liggero, Robert Lenzhofer explains what pigs have to do with gambling.

There are always unique ways for people to better remember a company and their products.

Some uses marketing officers to go straight to their target audience and discuss the company’s portfolio and the product it offers. Others hire celebrities and famous people to market their brand to the public.

A more unconventional yet effective way in making people better remember their companies and products is through the use of mascots.

Mascots have always been effective brand ambassador since they are ageless representatives that bridges the target audience and company and form a closer relationship with each other.

Take the case of Gluck Games for example. In every gambling conferences, Gluck Games bring their three adorable pigs to interact with each participants.

Robert Lenzhofer of Gluck Games said the pigs represent their most successful product, which is the Raid The Piggy Bank scratch card.

The scratch card, which was first released in the summer of 2015, was offered online through several online lottery and casino operators including Lottoland and Lottohelden. Raid The Piggy Bank offered players the chance to win £2,500 instantly by matching three numbers and for a stake of only £0.25.

Lenzhofer pointed out that Raid The Piggy Bank scratch card is their most successful product of their company, after selling a record-breaking 40 million piggy bank scratch cards. To ride on the popularity of the game, Lenzhofer said they bring pigs to promote their company.

“The ‘piggies’ are now our mascots in a way because it is our most successful product,” Lenzhofer told CalvinAyre.com. “It is a very simple scratch card but the way we positioned it, the way it is integrated, it’s very lottery. Like you go to the kiosk, you purchase your ticket, you scratch it and then you leave. Whereas, in slot machines, you just click and click and that’s the game of fun basically. So we have sold a record-breaking 40 million piggy bank scratch cards.”

The Gluck Games Chief Executive Officer also noted that the success of the product also created a positive domino effect to their other offerings.

The success of their product, according to Lenzhofer, helped them prove that joining two different offerings – in this case slots and lottery – in a single product apparently works in terms of how the lottery customers pick up our portfolio.

The popularity of their other product, Lotto Machine, which is a true cross-over between lottery and casino, is also rising partly because it’s also created by the same company which made the Raid the Piggy Bank game.

“We started 18 month ago, we know the industry. I’ve been in the industry for 16 years and we know that we really need a good launch partner. The one who understands lottery. The one who understands that there is a really big gap between lottery and slots basically. So we chose a partner, we chose Lottoland as our partner. We build quickly a basic set of scratch cards and what we are trying to do is to do everything from lotto to slots,” Lenzhofer said. “We are very very happy with the success not only in financials, but also we’ve proven the model. The model works. Lottoland, for instance, we convert about 50 to 60 percent of the entire audience into our product portfolio, which is pretty incredible, I think.”