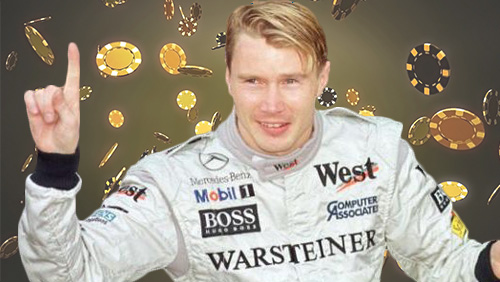 The Swedish online gaming starlets, Unibet, has added the two-time Formula 1 World Champion, Mika Häkkinen, to their stable, and Dara O’Kearney and Dave Lappin prepare for Season 2 of the Chip Race.

Unibet has signed a new ambassador.

To be honest, as I was watching the dude walking to and from the car, I was thinking, ‘wtf does Viktor Blom have to do with driving fast cars?’

But it wasn’t Blom.

It was the two-time Formula 1 World Champion, Mika Häkkinen. I have to admit, I know more about the geography of Pluto than Formula 1, but it’s a name I would recognise during quiz night down the Duck and Balls.

It’s the second major deal The Flying Finn has secured in the past week. Six days ago, Häkkinen, joined his old team Mclaren as a partner ambassador. Häkkinen was very loyal to Mclaren during his driving days featuring in 130 Grand Prix’s, winning 20, including his back-to-back Driver Titles in 98 & 99.

The Finn joins the likes of Neymar Jr, Cristiano Ronaldo, Denilson, and Boris Becker as major sporting stars past and present to take up sponsorship deals with online gambling sites that have a connection to poker.

Two years ago, two Irish poker players Dara O’Kearney and Dave Lappin started a podcast called The Chip Race. Taking a leaf out of Malcolm Gladwell’s book, although I am not sure it was deliberate, the boys aired only a single season containing seven episodes.

But they must have been bloody good episodes because in his most recent blog, O’Kearney writes about the overwhelming support and positive feedback he received all over the world, and it seems Unibet were also listening.

The Swedish online gaming gang signed the pair recently. Although I didn’t get a chance to talk to them during my time in Brighton at the Unibet UK Poker Tour, I do believe they recorded the first episode of the long-awaited Season 2 where they talked at length to the former Irish Open winner, and fellow Unibet Ambassador, Ian Simpson.

Stay tuned to the social media outpourings from both Lappin and O’Kearney to find out when the show will be released.